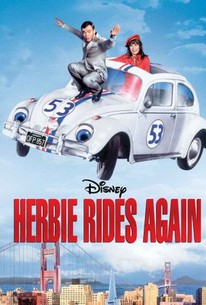 Herbie Rides Again is the first sequel to Disney's fabulously successful The Love Bug. The emphasis here is on Mrs. Steinmetz (Helen Hayes), a feisty old San Franciscan who refuses to sell her home to conniving developer Alonzo Hawk (Keenan Wynn). Hawk's nephew, lawyer Willoughby Whitfield (Ken Berry), joins Mrs. Steinmetz's camp when he falls in love with her niece Nicole (Stefanie Powers). (This, of course, is after Nicole angrily slaps Willoughby with a boiled lobster, sending him plummeting over a balcony railing and into the drink). The day is saved by Herbie, the almost-human Volkswagen, who rallies every VW in town to thwart Hawk's machinations. Herbie Rides Again performed admirably enough to inspire still another sequel, Herbie Goes to Monte Carlo.

The last decent herbie flick before they lost their charm if you ask me, the look and effects are just as cute and charming as the original and the fact its still set in SF makes it feel like a sequel to the first despite a different cast.

Really great madcap comedy-adventure of Herbie to protect her leading lady Helen Hayes by saving her beloved Victorian firehouse home from the wrecking ball of greedy real estate Keenan Wynn. Wynn is so hilarious as Disney's most lovable villian.