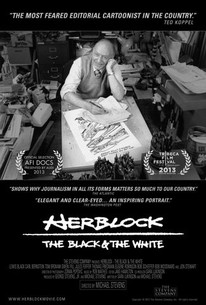 Herblock: The Black & the White Photos

Herbert L. Block looked to Ted Koppel like a "Vermont pharmacist" - not "the most feared editorial cartoonist in the country." And to Bob Woodward and Carl Bernstein, Block was ahead of everyone on Watergate just six days after the break-in: "We had thought it was probably a CIA operation... and did not think it was going to go to the White House. But Herb knew!" Block started cartooning in his Chicago teens and went on to win four Pulitzer Prizes and the Presidential Medal of Freedom during 55 years at the "Washington Post." He challenged the high and the mighty without fear or favor; Senator Joe McCarthy and Richard Nixon, famously, felt the sting of Herb's pen. In Block's words, it was his job to remind our public servants that "they are, after all, public servants." Director Michael Stevens and Producer George Stevens, Jr. draw on their knowledge of the Capitol and the best minds in journalism to tell the Herbert Block tale. Jules Feiffer, Gwen Ifill, Bob Schieffer, Tom Friedman, Tom Brokaw, and David Brooks offer insights on how one man with an artist's soul and a child's heart utilized his pen like a stiletto to express his belief in justice, human rights and always "watching out for the little guy" - while Jon Stewart and Lewis Black describe how Block influences 21st -century satire. The arc of Block's career takes us from World War II, to the Red Scare, our struggle for Civil Rights, Vietnam, Watergate and the conflicted media world of today - concluding with an unexpected end to the journey of the cartoonist-journalist known simply to millions as "Herblock." (c)

Critic Reviews for Herblock: The Black & the White

It's a factually accurate account of the man's work and its importance and meaning in (and beyond) the nation's capital, especially now, in all this bitterly partisan noise.

In print, on the Internet and through multiple mobile platforms, newspapers solider on, but editorial cartoonists are an endangered species. Watching Herblock may show you why they're worth saving.

Herblock is an earnest, well-made accounting of a remarkable and important life.

He returned continuously to themes of economic and social justice. Starting his career at the beginning of the Great Depression cemented those instincts and gave him material to develop a distinctive style for portraying haves and have-nots.

Loving, informative, often fascinating portrait. But it could've done without the re-enactments.

Although a lot of it is talking heads, I was never once bored: the editing and presentation are every bit as dynamic as the anecdotes.

A provocative, illuminating and vital tribute to Herbert Block. It should be mandatory viewing for every young American.

Overstuffed with talking heads, it is competently yet unimaginatively crafted, but manages to make its point.

All these encomiums grow wearying to watch. But you could do worse than this introduction to an inspiring artist and farsighted patriot.

Herblock and his mighty graphite were there for Watergate, McCarthyism, the civil rights movement, the Vietnam War, the anti-tobacco campaign, and the post-Columbine push for gun control ...

Audience Reviews for Herblock: The Black & the White

There are no featured audience reviews yet. Click the link below to see what others say about Herblock: The Black & the White!

Herblock: The Black & the White Quotes