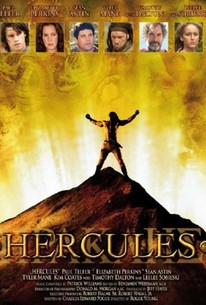 One of the greatest tales of Greek mythology returns to the screen in this made-for-television epic. A chance assignation between beautiful Alcmene (Elizabeth Perkins) and the god Zeus while her husband, Amphitryon (Timothy Dalton), is away leaves the woman pregnant with a son, Hercules (Paul Telfer). Hercules' questionable origins leave him with little affection from his mother and the great wrath of Hera, Zeus' wife. However, his incredible strength earns him the respect of Amphitryon, the friendship of Linus (Sean Astin), and the envy of his stepbrother Iphicles (Luke Ford). Hercules is wooed by Megara (Leeanna Walsman), even though Deianeira (Leelee Sobieski) is deeply in love with him; Hercules soon takes Megara as his bride, though he soon regrets his choice when he discovers his wife is actually in cahoots with Hera, still bitter over her husband's infidelity. After murdering four children -- two of his own sons, and two of the sons of Iphicles -- due to Megara's machinations, Hercules is banished from his homeland, and must perform a dozen labors as penance for his crimes. Hercules was originally aired on American television in May 2005.

Dan Purdy
as Captain of the Guard
View All

There are no critic reviews yet for Hercules. Keep checking Rotten Tomatoes for updates!

one of the most ridiculous stories i've heard in a long time. SO low budget it's actually really funny when he kills things.