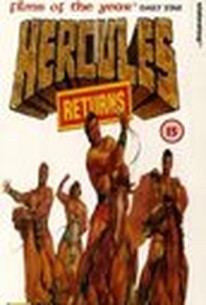 David Parker directed this campy send-up of Italian muscle-man movies that owes more than it should to Woody Allen's 1966 Japanese spy spoof What's Up, Tiger Lily? In a framing story, two film company executives (Bruce Spence, David Argue) resign from the company to start their own revival theater. They decide to re-open the theater with the same Italian sword-and-sandal epic that closed the theater down years ago. But in revenge for the two employees having quit on him, their ex-boss sends the theater a copy of Hercules -- but in Italian and without subtitles. In order to go ahead with the film screening, the two film entrepreneurs have to improvise a running English soundtrack for the film as it unspools in the projection booth. In their fractured version of Hercules, Hercules is now a nightclub performer who is snubbed by the nightclub owner's daughter Labia, because she is in love with Testiculi. And as the film unspools, the boys in the booth have to keep up the dubbing, no matter if it makes sense on the screen or not. ~ Paul Brenner, Rovi

There are no critic reviews yet for Hercules Returns. Keep checking Rotten Tomatoes for updates!

This is another reason why aussie cinema wins, yet again. Next time I'll have to pay closer attention to the 'strine bits so I can ask lots of questions? I want that Hercules rap! xD Best. Dubbing. Ever.

This is the silliest movie ever. :)