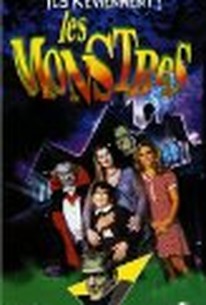 In this made-for-TV comedy adapted from the once-popular TV series The Munsters, Herman Munster (Edward Herrmann) and his wife Lily (Veronica Hamel) learn that they are no longer welcome in Transylvania, so they relocate to California with their children Eddie (Matthew Botuchis) and Marilyn (Christine Taylor), as well as Grandpa (Robert Morse). As the Munsters try to adjust to their new life in laid-back, sunny Los Angeles, they're faced with a crisis -- Marilyn not only discovers she's adopted but that her biological father has disappeared. Here Come the Munsters first aired on Halloween in 1995. Keep an eye peeled for cameo appearances by Yvonne De Carlo, Al Lewis, Butch Patrick, and Pat Priest, all of whom played Munster family members in the original series.

By the time you've sat through the 96-minute run time, all you'll want to do is track down the original series in order to vanquish the memory of what you've just watched.

For fans of the TV show only.