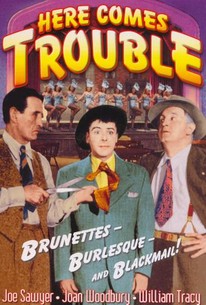 Hoping to start up where he left off before his studio was taken over by the government during WWII, Hal Roach turned out a brief series of "streamliners" (short-length feature films) under the umbrella title Hal Roach's Laff-Time. The third entry in this series was Here Comes Trouble, a Cinecolor attempt to revive a popular Roach military-comedy series from the early 1940s. William Tracy and Joe Sawyer return respectively as Doubleday and Ames, erstwhile army buddies with a predilection for trouble. Now in civilian clothes, Doubleday, he of the photographic memory, becomes a newspaper reporter, while the long-suffering Ames joins the police force. It doesn't take long for our heroes to become involved in a hectic search for a valuable missing diary. Former silent screen star Betty Compson provides a touch of class in the role of newspaper publisher's wife.

There are no critic reviews yet for Here Comes Trouble. Keep checking Rotten Tomatoes for updates!

There are no featured reviews for Here Comes Trouble at this time.