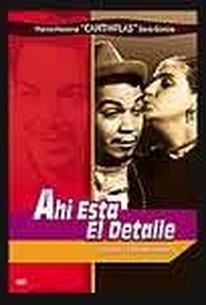 In this Spanish-language comedy with echoes of a subplot in Chaplin's City Lights, the Mexican comedian Cantinflas stars as a down-and-outer who feigns an identity as the brother of a rich woman. Over time, he takes advantage of the assumed persona to elevate himself first to the maid's beau, then to 'master of the house' status, but the ruse becomes increasingly difficult to sustain over time, resulting in some fairly outrageous complications. ~ Nathan Southern, Rovi

Agustín Isunza
as Attorney at Law

Narciso Busquets
as One of Cantinflas's "sons"

The plot is just a pretext to make Cantinflas shine. [Full review in Spanish]

There are no featured reviews for Here Is the Point (Ahí está el detalle) at this time.