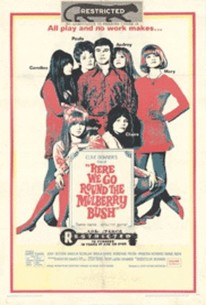 Jamie McGregor (Barry Evans) is in his last year of high school and hoping to lose his status as a virgin, in this romantic comedy romp. He holds hands with his date at a church dance, but things go no farther. He tries to make time with a gangly girl who has a face that could stop a clock. The more poor Jamie tries, the more he is convinced he will die a virgin. His luck seems to change when he spends a weekend with the prettiest girl in school, but there is more arguing than amore. The best thing about the film is the soundtrack provided by The Spencer Davis Group, Steve Winwood, Dave Mason and Traffic (which included Windwood and Mason). All the aforementioned groups had found or would soon achieve worldwide fame for their contributions in music. ~ Dan Pavlides, Rovi

Cavan Kendall
as Michael the Curate

Spencer Davis Group
as Group at Church Dance
View All

Critic Reviews for Here We Go Round the Mulberry Bush

Clive Donner, in short, who directs, directs quite beautifully from one point of view. Not the viewpoint of spoken language certainly, or of narrative. But from a pictorial point of view, of what a new fantasy of mod love and courtship might look like.

Audience Reviews for Here We Go Round the Mulberry Bush

There are no featured audience reviews yet. Click the link below to see what others say about Here We Go Round the Mulberry Bush!

Here We Go Round the Mulberry Bush Quotes