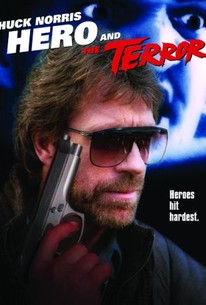 Hero and the Terror Photos

Hero and the Terror O'Brien (Chuck Norris) is a detective who captured the psychotic maniac Simon Moon (Jack O'Halloran), aka the Terror, by mistake. When the obese 6' 6'' villain fell from a ladder trying to escape, he was knocked cold and the lucky O'Brien got the credit for his collar. With his psychiatrist sweetheart Kay (Brynn Thayer), pregnant with their first child, the Terror escapes. Although he is large and unforgettable, the terrible Titan manages to evade the police, and no one even notices him when he carts cadavers on his massive shoulders.

Gary Rooney
as Cop
View All

Critic Reviews for Hero and the Terror

It is honorable of Norris to try to expand and develop his screen character, but good intentions are not enough. What this screenplay needed was a few good kicks to the neck.

The plot of this movie barely makes sense, and Chuck Norris doesn't even have the decency to kick that many faces in before it wraps up its amazingly tedious 96 minutes.

If you're looking for a movie about two unmarried lovers contending with their first child together, there are plenty out there...just make sure it doesn't star Chuck Norris.

Audience Reviews for Hero and the Terror

Extremely well made and genuinely scary! Martial arts superstar Chuck Norris packs a powerful punch in this exciting action-thriller about a tough L.A. cop's pursuit of a savage villain (Jack O'Halloran) from his past. Adroitly directed with startling images and horrowing action scenes, Hero and the Terror is edge-of-your-seat suspense from beginning to end!

Hero and the Terror Quotes