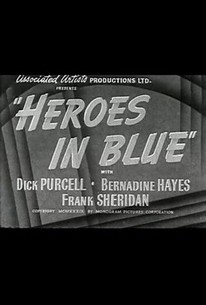 Brothers Terry and Joe Murphy (Dick Purcell, Charles Quigley) are the Heroes in Blue in this Monogram actioner. Actually, Terry, a policeman, is the only one "in blue"; Joe washes out of the police training program early on, opting for a dangerous association with a band of gangsters. Poor old Pop Murphy (Frank Sheridan), an ex-cop turned night watchman, tries to extricate Joe from his dilemma, with disastrous results. It's up to Terry to round up the crooks during the film's pulse-pounding racetrack finale. It's best to ignore some of the plot absurdities in Heroes in Blue, including a murder that occurs in full view of a crowd, but reaps only a single solitary eyewitness.

Critic Reviews for Heroes in Blue

There are no critic reviews yet for Heroes in Blue. Keep checking Rotten Tomatoes for updates!

There are no featured reviews for Heroes in Blue at this time.