The Heroes of Telemark1965 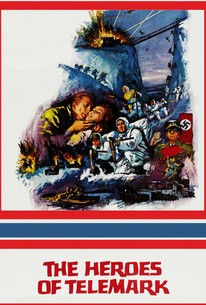 The Heroes of Telemark Photos

In this tale of espionage and adventure set during World War II, Norway has fallen under Nazi occupation, and a factory is producing "heavy water" (a key ingredient in the manufacture of atomic weapons), under the order of the German military. Knut Straud (Richard Harris), a leading figure in the Norwegian underground, joins forces with scientist Dr. Rolf Pederson (Kirk Douglas), who is working with British intelligence agents to destroy the factory in hopes of keeping the Atomic Bomb out of Axis hands. However, while originally Straud and Pederson are only supposed to infiltrate the factory as a reconnaissance force while awaiting British troops, the English army is forced to retreat from their plans, leaving the Norwegians to destroy the factory and scuttle a shipment of the "heavy water" all by themselves. Inspired by a true story, The Heroes of Telemark also features Michael Redgrave and Anton Diffring.

Maurice Denham
as Doctor at Hospital

David Davies
as Captain of Galtesund

Faith Brook
as Woman on Bus

Jan Conrad
as Watchman in Factory

Pamela Conway
as Girl in Darkroom

Critic Reviews for The Heroes of Telemark

The Heroes of Telemark gets lost in the labyrinth of opposing temptations without a single element managing to guide the project. [Full Review in Spanish]

The snowcovered Norwegian fjords and mountains overwhelm the characters and the flat story.

The acting is strong. Douglas and Harris are particularly good.

Audience Reviews for The Heroes of Telemark

True story of the way the Norwegians tried to destroy the heavy water production plant after unsucessful allied bombing runs....Very taut film with some great scenes, fantastic snow shots and a great finish....the alarm clocks were a bit daft though.

The kind of pulpy war movie that has more in common with boy's own comic books than the conflict itself. If you like stuff like Where Eagles Dare, you'll like this.

The Heroes of Telemark Quotes