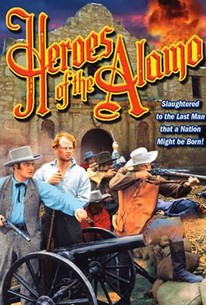 Heroes of the Alamo Photos

Produced by Greek-born Gower Gulch "tycoon" Anthony J. Xydias, this film was a remake, with plenty of stock footage, of Xydias' silent With Davy Crockett at the Fall of the Alamo (1926). In the new version, however, Crockett (played by a far-too-young Lane Chandler) is almost a bit part, the film concentrating instead on newlyweds Almerian and Anne Dickinson (Bruce Warren and Ruth Findley), heroic Texans based on real-life Alamo victims Almeron and Suzanna Dickinson. The siege of the Alamo by General Santa Anna (Julian Rivero) is mainly depicted via poorly-inserted stock footage from Xydias' silent version, but all the famous elements are there: Travis' (Rex Lease) line in the sand, Bowie (Roger Williams) crossing that line despite his illness and the death of all three mythical American heroes. The sole survivor is Anne Dickinson (a true flight of fancy), who is present when Sam Houston (Edward Peil, Sr.) utters the famous line, "Remember the Alamo!" Consisting of numerous gaffes (the defenders of the Alamo perform a rendition of The Yellow Rose of Texas, written years later, to mention but one example) and enacted on laughably cheap sets, Heroes of the Alamo was dismissed by an overwhelmingly hostile press. Xydias, who had come out of retirement for this, and a proposed series of historical Westerns, never produced another film. Heroes of the Alamo was later shortened to about half of its 80 minutes running time and sold as an educational short subject under the title Remember the Alamo.

Rex Lease
as William B. Travis

William Costello
as General Cos

Critic Reviews for Heroes of the Alamo

There are no critic reviews yet for Heroes of the Alamo. Keep checking Rotten Tomatoes for updates!

There are no featured reviews for Heroes of the Alamo at this time.

Heroes of the Alamo Quotes