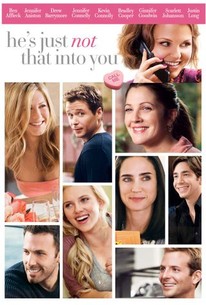 Critics Consensus: Despite the best efforts of a talented cast, He's Just Not That Into You devotes too little time to each of its protagonists, thus reducing them to stereotypes.

Critics Consensus: Despite the best efforts of a talented cast, He's Just Not That Into You devotes too little time to each of its protagonists, thus reducing them to stereotypes.

Critic Consensus: Despite the best efforts of a talented cast, He's Just Not That Into You devotes too little time to each of its protagonists, thus reducing them to stereotypes.

He's Just Not That Into You Photos

Ken Kwapis' adaptation of Greg Behrendt and Liz Tuccillo's best-selling self-help book He's Just Not That Into You follows the love lives of a dozen or so characters. Ginnifer Goodwin stars as Gigi, a young woman attempting to understand the mixed signals she gets from the men she's dating. She gets advice from a bar owner (Justin Long) who prides himself on understanding the ins and outs of the dating scene. Gigi's co-worker Janine (Jennifer Connelly) finds herself involved in a major redecorating project with her husband, Ben (Bradley Cooper). Unbeknownst to Janine, Ben contemplates an affair with Anna (Scarlett Johansson), an attractive woman trying to make a career as a singer. Another of Gigi's friends at work, Beth (Jennifer Aniston), enjoys a successful, healthy relationship with Neil (Ben Affleck), but storm clouds hover over them as he has no interest in getting married. Kris Kristofferson co-stars as Beth's father. ~ Perry Seibert, Rovi

Justin Long
as Alex
View All

Critic Reviews for He's Just Not That Into You

What's surprising is how many marquee names [Ken] Kwapis has lined up for these regurgigated romantic lectures on when to know when someone is into someone.

... it was entertaining and it addressed all the normal relationships troubles people face each day.

Though the actors involved are mostly major players, the material they've been given to work with is very old hat.

He's Just Not That Into You is like reliving your 20s, without any of the fun.

I thought there was a level of sophistication in the relationships that I certainly did not expect.

The movie gets smothered by one romantic comedy cliché after another.

Although it's disguised as a Valentine's Day flick, and the advertising tries to convince that it isn't filled exclusively with mushy stuff, it's certainly not fun-loving.

Kwapis gives the film the perfect blend of heart, humor and emotional connection.

How could anything starring Jennifer Aniston, Scarlett Johansson, Drew Barrymore and Jennifer Connelly not possibly work?

It's all very unsurprising but also extremely reliable.

Then there are moments that are quite smart, most involving Goodwin, that help elevate the material slightly. I'm not sure the good easily outweighs the bad, but it's close enough that I eventually gave in and found myself having a good time.

Audience Reviews for He's Just Not That Into You

Funny rom com about dating and falling in and out of love. The movie follows the lives of three female co-workers Gigi (who is desperate and can't get any guy), Janine (who married her college boyfriend, whose husband happens to have an affair) and Anna (who has been dating the same guy for 7 years and he doesn't want to get married). You think from the title of the movie that this is a man bashing movie but quite the opposite. The men turn out well in this movie (apart from Bradley Cooper who is married to Jennifer Connelly and has an affair with Scarlett Johansson. But who wouldn't pick Scarlett?!) Anyway, the women in the movie are de-ranged, paranoid, insecure and freaky. In comparison the men are quite normal and straightforward. Star studded cast. I was disappointed Drew Barrymore didn't have a bigger role as she is great in rom coms. Drew has the best lines though. Her scenes involving the voicemail and MySpace guy are hilarious. Scarlett looks amazing. Jennifer Connelly usually plays more serious roles but does well in this rom com. Jennifer Aniston is in her element in her stereotypical rom com role. She has a great frame but her face looks drawn and older. Kevin Connolly and Justin Long are nice guys in this movie. Ben Affleck's character is a gem. If you liked 'How to Lose a Guy in 10 Days' you will like this movie too. Everyone will be able to identify with at least one of the characters. There's a mixed bag. Bradley Cooper is bad but hot! Kevin Connolly's character is really sweet. He's my fave :) Ginnifer Goodwin has a great smile and lovely clothes.

As far as romantic comedies are concerned, I'm usually apprehensive about watching them. I think it's a case of clichéd, predictability that ruins kit for me. But with this film, I thought it was different take on the usual romantic comedy. The result is not a perfect film, but is definitely better than many other rom-coms out there who are predictable and rely on the standard formula that has plagued the genre. I thought that the film was pretty good for what it was, and that it was different than most rom-com, which was a great. The cast here are great and I very much enjoyed the performances. He's Just Not That Into You is flawed, but for the most part, it works well. The film is uneven at times, but there's a certain charm to this film, that's impossible to hate. I'm very picky when it comes to these types of films, but I enjoyed the film for its different approach to the genre. The film is funny and the cast is good, however there are parts that could have been better. But this is still a good little comedy that has plenty of heart. He's Just Not That Into You is one of the few rom-coms that succeeds at actually being good entertainment. While most films in the genre are painfully dull, this one has enough originality to keep you interested. A rom-com that is very different, this one is a must see for viewers tired of the same old formula. Give this one a shot, you may be surprised at how good it really is. He's Just Not That Into is a different type of, and a welcome new on the traditional rom-com formula.

Wow, Ginnifer Goodwin and Scarlett Johansson really did womankind a huuuuge favour by portraying women as unstable, nervous wrecks who spend their entire lives obsessing over signals from men as opposed to, oh, say, doing work or anything. I added half a star for the more mature relationship between Ben Affleck's reliable, charming (too-good-to-be-true) Neil and goodness knows Jennifer Aniston is always a welcome presence. I have never liked Bradley Cooper in any of his roles.

Somewhat painful, but the faux-documentary style was charming and the all-star cast did a lot to make the movie feel authentic. A few great lines in the movie, but too much space between them. I couldn't help thinking that this movie is a poor man's "Crazy Stupid Love" throughout its entirety ... which, from me, is actually high praise. Best part was that I watched and reviewed it on Flixster. Might have gotten an extra 1/2 star because of that.

He's Just Not That Into You Quotes