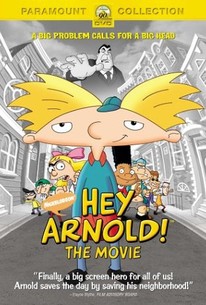 Critics Consensus: Bland, unoriginal, and lacking the wit of the TV series, Hey Arnold is a 30 min cartoon stretched beyond its running time.

Critics Consensus: Bland, unoriginal, and lacking the wit of the TV series, Hey Arnold is a 30 min cartoon stretched beyond its running time.

Critic Consensus: Bland, unoriginal, and lacking the wit of the TV series, Hey Arnold is a 30 min cartoon stretched beyond its running time.

Everyone's favorite football-headed city kid graduates from television to the big screen in this animated comedy-adventure based on the Nickelodeon TV series. Arnold (voice of Spencer Klein) and his good friend, Gerald (voice of Jamil Walker Smith), live in a tight-knit neighborhood in the middle of a big city. Like most of their neighbors, Arnold and Gerald love their community, and when they learn that Scheck (voice of Paul Sorvino), a wealthy and powerful developer, plans to buy up their neighborhood, tear down the buildings, and put up a massive shopping mall in its place, they decide something has to be done. While the adults come up with a dodgy scheme to blow up the streets in their neighborhood, Arnold and Gerald hatch a more practical scheme, with the help of Helga (voice of Francesca Marie Smith), who can't decide if she likes Arnold or hates his guts. Arnold and Gerald learn that their neighborhood was designated a historical landmark years ago, but can they prove it before Scheck moves in with his bulldozers? Hey Arnold! The Movie also features the voice talents of Jennifer Jason Leigh, Christopher Lloyd, and Dan Castellaneta.

Not inspired. What did you expect?

Pic has lots of charm, and parents in attendance won't feel too bored or alienated by its goings-on, while kids will lap it up.

The simplistic drawing is closer to Peanuts than The Lion King, and the dialogue is strangely anachronistic.

Arnold has his place on the small screen, but here his attempts to save his neighbourhood from corporate takeover seem overextended.

The coloured pencil tones and quirky-looking characters are likeable, and the plot cuts the sentimentalism with sarky wit and minimum schmaltz.

Amiable and good-natured stuff for younger kids, I suppose, but nothing to get hugely excited about.

A god awful closer for such a great show.

If this silly little cartoon can inspire a few kids not to grow up to be greedy bastards, more power to it.

Hey Arnold is a film that kids and adults will enjoy.

...This film really has no business in theatres.

Arnold's jump from little screen to big will leave frowns on more than a few faces.

Another solid addition to the Nickelodeon cinema canon.

Just like the similar animated movie of the cartoon series Doug, this is purely for fans of the original cartoon series. I can't really see any kids (or adults) getting along with this unless they know the original series and have followed it (the various backstories). Yet despite that Hey Arnold! (like other 90's Nick toons) is very open to all ages because its content is relatable and surprisingly clever at times. This was probably my fave Nick toon even beating Rugrats, why? Well because (as said) you could relate to it quite well. Many of the stories tend to revolve around real situations that kids deal with in their daily lives. Situations many of us will have gone through at some stage in various ways. The usual stuff like bullies, school, school projects, parents, families, snow days, playing outside with your friends, adventures using your imagination etc... Along with that is the great array of loud quirky characters which fill this world (Dan Castellaneta voicing grandpa Phil being one of the best). The odd designs for the characters is the main series trait which is admittedly bizarre to look at. I'm guessing they are probably caricatures based on creator Craig Bartlett's real old school friends and adults he knew growing up. Of course the colourful hand drawn style of the cartoon is one of the lures for me. Really rich, vivid, bold environments that look glorious. Each cartoon has their own unique individual artistic style, but Hey Arnold! is really one of my favourites. Its so pleasing to the eye, makes me wanna live in there (the fictional city of Hillwood). As for this movie, its obviously an extended version of the regular cartoon; but alas as usual it can't quite live up to the original shorter material. The plot is quite a heavy one involving Arnold and Gerald trying to save their neighbourhood from being destroyed by some rich tycoon. This doesn't really work too well in my opinion as it just seems too much of a stretch for the characters to achieve. At the same time some of the subplots by other characters to stop all this from happening also come across as a bit too daft (yeah I know its a cartoon but still). Blowing a hole in their own street with tonnes of dynamite? The whole tired spy parody angle complete with James Bond-esque characters and gadgets...ugh! How many times must we see that?? The main sore point here is, in the original cartoon Arnold and co often deal with simple kids issues, as I already pointed out. The cartoon worked so well because even though the episodes usually dealt with childish things, they were completely relatable (as already pointed out) and kinda cute. So when you then give these characters tasks to perform that are way out of their depths, tasks that would usually involve adults, it loses that cuteness and relatability. Because no one can really relate to single-handedly taking down huge corporations and being ninja spies. All in all it does feel like the writers have had problems trying to think of cute filler to pad out the run time. Even for a kids film its dreadfully average and predictable. I realise its a difficult problem to juggle, trying to remain faithful to the original show but making it bigger for the silver screen. But then what does that tell you? Maybe don't make a movie out of said material because its not meant for the big screen perhaps? The new characters are also kinda bland and uninteresting unfortunately. They are voiced well by a stellar cast but they just seem uninspired. All except for the Coroner voiced by Christopher Lloyd, he was quite cool. All the other regular characters are present and correct voiced by the regular cast so continuity is good. Obviously the movie only focuses on a few so many are pushed into the background. Visually and audibly the cartoons style is the same accept for the odd spot of CGI which just about blends in OK. For the fans to look at this film is to love it. Its as you would expect but so much crisper and more delightful, but that's about it really. The plot is lame, it feels terribly stretched, they try to cram all the characters into the background, and the little amusing touches have disappeared. All they needed to do was stick to a more kid friendly plot if you ask me, or a continuation from the final series perhaps. Something we (the fans) can all relate to, exactly why the series was so successful in the first place.

Hey Arnold! The Movie is a fun movie for kids and fans of the show. I loved the show, and this almost was as good.

The TV show, one of the greatest shows Nickelodeon has ever created, & one of the greatest shows ever made that teaches morals without it even intending to. This movie, the consensus sums it up, perfectly. When the commercials to this movie showed up, it made it seem like it was going to be nothing but fun, some ass-kicking action, & great storytelling. Instead, it was bland, dull, boring, predictable, corny, & unoriginal. Everything an animated movie should not be. I can't say much on the movie because the consensus already summed it up. But I remember my whole family almost wishing to just walk out on the movie, & everyone saying "It was so dumb." It almost ruins the charm & silliness of the original show it's based on, seriously.