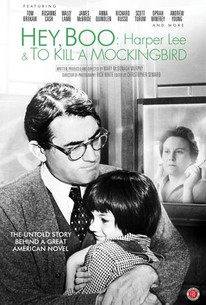 Hey, Boo: Harper Lee and 'To Kill a Mockingbird' Photos

Fifty years after winning the Pulitzer Prize, To Kill a Mockingbird remains a beloved bestseller and quite possibly the most influential American novel of the 20th Century. Nearly one million copies are sold each year and the novel has been translated into more than forty languages worldwide. The film version, starring Gregory Peck as Atticus Finch, won a trio of Academy Awards, and the U.S. Postal Service's new stamp honoring Peck depicts him wearing glasses, as Finch. Behind it all was a young Southern girl named Nelle Harper Lee, who once said that she wanted to be South Alabama's Jane Austen. Hey, Boo explores Lee's life and unravels some of the mysteries surrounding her, including why she never published again. Containing never-before-seen photos and letters and an exclusive interview with Lee's sister, Alice Finch Lee, the film also brings to light the context and history of the novel's Deep South setting and the social changes it inspired after publication. Oprah Winfrey, Tom Brokaw, Anna Quindlen, Rosanne Cash, Wally Lamb, Richard Russo, Scott Turow, Andrew Young and others reflect on the novel's power, influence, and popularity, and the many ways it has shaped their lives. --(c) First Run Features

Critic Reviews for Hey, Boo: Harper Lee and 'To Kill a Mockingbird'

Between interviews about the merits and courage of the novel and clips from the 1962 film adaptation that earned Gregory Peck an Academy Award, Mary McDonagh Murphy's directorial debut offers up a few morsels of fresh material.

Here's a riddle. Why is any documentary about Harper Lee like a doughnut? Because both have a hole in the middle.

Harper Lee hasn't been interviewed in 47 years, but this meditation on her only novel, To Kill a Mockingbird, puts you inside her skin.

It would have been wonderful if Lee had consented to an interview for this documentary, but at least we have, among many others, her 99-year-old sister Alice.

Hey, Boo is so appealing because it's obviously and undeniably a work of commitment and passion.

Fascinating documentary about the reclusive author and her sole literary masterpiece.

A film that is both love letter to what may very well be the great American novel and a well researched exploration into the life and personality of its author.

Murphy seems determined above all to respect Lee's desire for privacy, making her a sort of anti-Errol Morris.

Not the most accomplished of documentaries, but it's amiable enough.

...a lovingly told biography that is well-crafted, informative and entertaining - all things that a good documentary should be.

...more a celebration of a book and its movie adaptation than a biographical documentary...Passages are read and we marvel at just how many great moments are there to be found.

It's always nice to see a movie that values literature and literacy - and this is one of the better ones.

Audience Reviews for Hey, Boo: Harper Lee and 'To Kill a Mockingbird'

With Harper Lee politely declining to be interviewed director Mary Murphy had to rely on the recollections of friends and associates to piece together this interesting but somewhat anticlimactic documentary about one of America's most beloved authors.

Hey, Boo: Harper Lee and 'To Kill a Mockingbird' Quotes