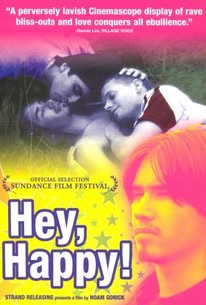 Society as we know it may have been lost, but sex and dancing are still in style in this outrageous post-apocalyptic satire. In a not-so-distant future where a variety of environmental disasters have led to the final collapse of Western civilization, sexually ambiguous hipster Ricky G. (Johnny Simone) leads an encampment of rave kids who have created a makeshift city on the outskirts of Winnipeg. One of the community's leading citizens is porn-merchant and disc jockey Sabu (Jeremie Yuen), whose inexhaustible sexual appetite has led him on a mission to seduce 2,000 men before a looming flood destroys the village. Sabu is close enough to hitting the magic number to have chosen the special man he wants to be Mister 2K -- Happy (Craig Sftanas), an attractive if socially inept science buff who is able to communicate with alien life forms. However, Sabu has a rival for Happy's affections -- body-modification advocate and hair stylist Spanky (Clayton Godson), who tries to foil Sabu's plans by abducting Happy. Hey, Happy! was the first dramatic feature from Canadian independent filmmaker Noam Gonick.

Zane Procyck
as One of The Firebugs

Canon Beardy
as One of The Firebugs

Terrance Thompson
as One of the Firebugs

Suzie Boobies
as Herself

Feels too formulaic and too familiar to produce the transgressive thrills of early underground work.

Hey, Happy! is many things -- stoner midnight flick, sci-fi deconstruction, gay fantasia -- but above all it's a love story as sanguine as its title.

Writer-director Noam Gonick obviously had to get this one out of his system.

This ready-made midnight movie probably won't stand the cold light of day, but under the right conditions, it's goofy (if not entirely wholesome) fun.

Often demented in a good way, but it is an uneven film for the most part.

There might be some sort of credible gender-provoking philosophy submerged here, but who the hell cares?

There are no featured reviews for Hey Happy! at this time.