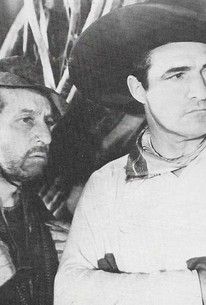 Tom Mix goes undercover as a prison inmate in this Western from Universal. The reason for Tom's masquerade is a bank robbery that wiped out his pretty boss, Nora Lane (Judith Barrie). The perpetrators, Doc (Donald Kirke), Spike (Raymond Hatton), and Big Ben (Eddie Gribbon), were all sent to the big house, but without revealing where they hid the loot. It is Tom's job to find out and a prison break offers him the perfect opportunity to do so. But the cowboy's disguise works all too well and soon both Nora and the law believe him to be in cahoots with the escapees. According to Hidden Gold's publicity, an actual forest fire was used in the film, the crew having been enlisted by the fire brigade during location filming in the hills north of Los Angeles.

Tony Jr. the Horse
View All

There are no critic reviews yet for Hidden Gold. Keep checking Rotten Tomatoes for updates!

There are no featured reviews for Hidden Gold at this time.