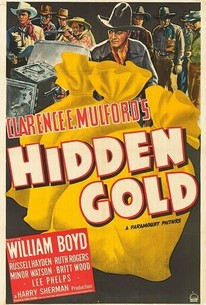 Hidden Gold was the 29th installment in the "Hopalong Cassidy" western series. It perhaps goes without saying that "Hoppy" is played by William Boyd, while his sidekick Lucky Jenkins is essayed by Russell Hayden. The eponymous hidden gold is being covertly mined from an equally hidden mine by a gang of outlaws, who take time out to stage a series of stagecoach holdups. Hoppy and Lucky arrive in town to put an end to the robberies, but first they have to determine the identity of the outlaw leader. After five reels' worth of "cat and mouse", the action is laid on thick and heavy in reel six. Future singing cowboy star Eddie Dean shows up in a very minor role.

There are no critic reviews yet for Hidden Gold. Keep checking Rotten Tomatoes for updates!

There are no featured reviews for Hidden Gold at this time.