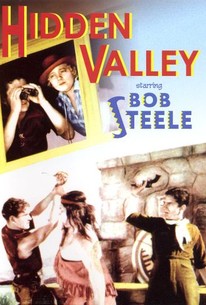 Filmed on glorious locations at the foot of California's Mount Whitney by ace cinematographer Archie Stout, this above-average Monogram B-Western starred wiry, little Bob Steele in an off-beat story of a cowboy searching for a lost tribe of Indians. Surviving in the seemingly impassable Hidden Valley, the tribe and its gold is threatened by villainous Kenneth McDonald and his gang. One of the gang-members is heroine Gertrude Messenger's young brother Jimmie (Ray Hallor, who is captured by the wild Indians and is about to be sacrificed to their god when rescued by Steele and the sheriff (Arthur Millett, who arrive, not with the cavalry, but in the Goodyear Blimp!

There are no critic reviews yet for Hidden Valley. Keep checking Rotten Tomatoes for updates!

There are no featured reviews for Hidden Valley at this time.