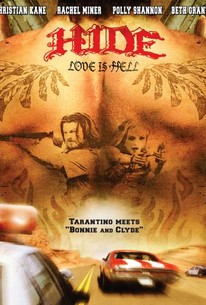 Two lawless lovers careen recklessly down the dangerous path of destruction, murder, and mayhem on their way to meeting the one person who will be their judge, jury, and executioner. Billy and Betty were the Bonnie and Clyde of their generation. But their crime spree came to an end when, after gunning down innocent victims in a violent bank robbery, Billy was apprehended by the authorities and sentenced to life in prison. Seven years later, a jurisdictional technicality states that Billy will have to be tried in a neighboring state, and Betty takes the opportunity to spring her lover during the tense prison transfer. Swiping a car and hitting the road, the pair attempt to pick up where they left off when Betty realizes that Billy isn't the same man she fell in love with. Prison has changed Billy, and after admitting that he feels a terrible sense of remorse for his past transgressions, he reveals that someone is targeting and torturing those closest to him. And there's proof of the crime, too, because whoever is responsible for these heinous crimes has sent photographs of the victims to Billy. Later, as Betty and Billy arrive at their destination to find that the small town has seemingly been abandoned, a scream rips through the darkness and Billy's sister Jenny appears bloody and shaken. Judgment is coming, and although Billy now regrets his past sins, there's no appealing his sentence of death.

It's a good deal too stagey to work as a thriller, but the location shooting on desolate mud-flats is resonant and the twist has a sick verve. Addictive stuff.

It's all given a much-needed shot of credibility by the strength of the writing and the subtlety of the directing. Losey is a talent to watch, and 'The Hide' makes for one hell of a Hollywood calling card.

Marek Losey's thriller The Hide is a macabre gem. It's a crude but enthralling duel with shades of Peter Schaffer's Sleuth. Shades too of Hitchcock's Rope.

The Hide is a modestly scaled but cleverly written chamber piece.

...the film boasts a promising opening half hour that's slowly but surely squandered...

For two thirds of the film, Hide plays as David Lynch and Quentin Tarantino-lite and not those filmmakers as they are today but as they were in, say, 1994.

Moody, minimalist and well-observed this is a quirky low-budget triumph for director Marek Losey.

Every time you think you've got The Hide pegged, and marked it down as one of those small British films, it twists out of reach. A play adaptation that exceeds boundaries and defies expectations.

A beguiling thriller which draws its considerably grisly strength from a first class script.

An enjoyably dark, sharply written drama with strong performances from its two leads.

One claustrophobic location, two men, a relationship that shifts with the flood tide... and a film that far exceeds the limitations imposed by its low budget and small scale.

"In the spirit of Bonnie & Clyde & Natural Born Killers" Where was the spirit? It seemed to start off OK but after awhile I just gave up & didnt care anymore