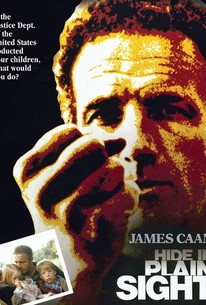 Star James Caan made his directorial debut in the fact-based Hide in Plain Sight. Caan plays a divorced husband and father who comes to visit his ex-wife and children, only to discover that they've evidently disappeared from the face of the earth. Running up against the stonewall tactics of the authorities, Caan eventually learns that his wife's present husband is a witness against the mob, and that his family members have been given a new home and new identities via the Justice Department's new witness relocation program. Denied information concerning his children's whereabouts, Caan desperately attempts to find them himself. Hide in Plain Sight was adapted by Spencer Eastman from the book by Leslie Waller.

Eddy Donno
as Man at Party

Vincent Cavalleri
as Man at Ballgame

For the most part, Caan sustains an appealing observational approach, and also evinces an exceptional range in his stylistic moves.

This movie isn't a study of an uptight guy; it's a human story of a father looking for his children. Why allow irrelevant acting stratagems to distract us from the heart of the story?

.A heart-felt and inspiring melodrama thanks to the power of the haunting true incident."

Hide in Plain Sight raises some important questions about the rights of individuals in the face of arbitrary institutional policies.

I never heard of Hide In Plain Sight until I recorded it off the free channel.After watching it, I looked it up on imdb & read it flopped at the box office.For it being such a good movie I can't believe it.It was a very good movie but way underated.Thomas went through alot of crap to see his kids again.If the scene where he finally finds them doesn't warm your heart, make you happy or touch you in some sort of way then you have no feelings