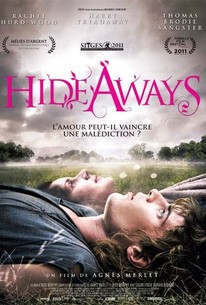 In this modern day fantasy from director Agnes Merlet, James Furlong was born into family where the men all have strange, destructive powers; his grandfather loses his sight when he thinks about making love, and his father can stop mechanical objects from working when he feels fear. As a youngster, James discovers his curse is especially awful -- when he suffers physical or emotional discomfort, he sends out waves that can kill any living thing is his path. After causing the death of several relatives and schoolmates and severely injuring his best friend Liam, James runs away from home, making a home in the woods where he can't hurt people any more. Years later, teenage James (Harry Treadaway) encounters Mae O'Mara (Rachel Hurd-Wood), a young woman struggling with cancer who needs to get away from her caring but overbearing mother (Susan Lynch). James and Mae fall in love, and they discover this positive emotion causes James to send out healing energies, but their blissful time may be short lived, as Liam (Thomas Brodie Sangster), still suffering from the impact of James's powers, has tracked him down and is determined to get even. Hideaways received its world premiere at the 2011 Tribeca Film Festival.

There are no critic reviews yet for Hideaways. Keep checking Rotten Tomatoes for updates!

There are no featured audience reviews yet. Click the link below to see what others say about Hideaways!