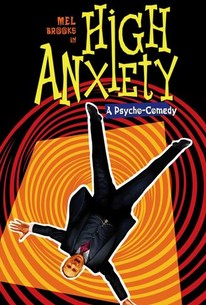 Critics Consensus: Uneven but hilarious when it hits, this spoof of Hitchcock movies is a minor classic in the Mel Brooks canon.

Critic Consensus: Uneven but hilarious when it hits, this spoof of Hitchcock movies is a minor classic in the Mel Brooks canon.

This is Mel Brooks' spoof of over ten Alfred Hitchcock classics, including Psycho, Vertigo, and The Birds (Brooks actually used the bird trainer from that classic suspense movie in making his film). Brooks plays Dr. Richard H. Thorndyke, a renowned Harvard psychiatrist with a concealed fear of heights, or High Anxiety. Thorndyke takes over as the newest director of the PsychoNeurotic Institute for the Very, Very Nervous after the last director dies under suspicious circumstances. He soon finds himself to be in the company of some very strange colleagues, including longtime Brooks collaborators Cloris Leachman and Harvey Korman, with Madeline Kahn as Victoria Brisbane, the eccentric daughter of a patient at the institute and Thorndyke's love interest. Korman takes on the role of Dr. Charles Montague, a psychiatrist with a closeted habit of his own. Leachman plays Charlotte Diesel, a charge nurse with a dark sneer and tendency towards domination. As Thorndyke heads to a psychiatry conference, he is faced with saving the Institute, his reputation, and his own sanity. Although the film was not well-received by critics, it picked up a 1978 Golden Globe nomination for best picture (musical or comedy) and landed Brooks a nomination for best actor. The movie has a number of cameos, from a young Barry Levinson's spot as an unstable bellboy to a small part by Hitchcock's right-hand special effects man, Albert J. Whitlock, who plays Kahn's father. ~ Rachel Koetje, Rovi

Al Hopson
as Man Who is Shot

Eddie Ryder
as Doctor at Convention

Ira Miller
as Psychiatrist with Children

Robert Manuel
as Policeman at Airport

Alan U. Schwartz
as Psychiatrist
View All

One of the problems with Mel Brooks's High Anxiety is that it picks a tricky target: It's a spoof of the work of Alfred Hitchcock, but Hitchcock's films are often funny themselves.

Mel Brooks, during his peak years, never met a genre he couldn't wrestle to the ground. And High Anxiety, his 1977 tribute to the films of Alfred Hitchcock, is a masterpiece of characterization, design and execution.

More than an homage to Alfred Hitchcock, High Anxiety is a copycat. [Full Review in Spanish]

[VIDEO ESSAY] Mel Brooks's flair for comic riffing against a stylized background of plot devices draws on a long tradition of spoof movies that date back to the first days of sound cinema.

Most of this stuff isn't particularly funny however, and even though I watched High Anxiety for the first time in 2010, I'm not sure it would have been very funny back in 1977 either.

Brooks spoofs the master, Alfred Hithcock, and make a minor comedy classic of his own with High Anxiety

One of Brooks lesser comedies from the 1970s, but it beats hands-down any of his later work.

The cinematic equivalent of an Elvis impersonator

Brooks at his most brilliant!

So lame. I couldn't even sit through it all. Not funny at all.

Dr. Charles Montague: Enjoy yourself, for God's sake! Get your mind off the Wentworth murder... Accident! Accident!  "A Psycho-Comedy" High Anxiety is a really stupid, moderately funny Hitchcock spoof. This isn't one of Mel Brooks better films. It doesn't touch his classics like Blazing Saddles or Young Frankenstein, but it is much better than his bottom dweller Dracula: Dead and Loving It. This one works just enough for me because of the subject matter. I am a huge Alfred Hitchcock fan; just like everyone else who is familiar with his work. So a spoof of some of his most legendary films and scenes was, at the very least, going to be interesting. While I think Brooks could have done a much better job with the material, it was still decent enough.  The highlights of the film are two scenes that are reenacted from two different Hitchcock films. The first being the shower scene from Psycho and the second being the birds landing behind the woman from The Birds. Both brilliant scenes are taken and used in the most ridiculous context imaginable. Watch the scenes and you'll know what I mean. They definitely aren't smart comedy, but smart comedy was never what Brooks was selling; and that's what makes him such a genius I guess. This should be good enough if you are a fan of Brooks' brand of comedy. It would also help if you are familiar with Hitchcock because if not, a lot of the references and comedy will be lost on you. Still it's a little disappointing just because I wanted a Young Frankenstein caliber film from Brooks when he was working with Hitchcock's films as his material.

Another hilarious spoof comedy from Brooks, this one spoofs Hitchcock's films, and it's very effective. If you like Brook's films, check it out.