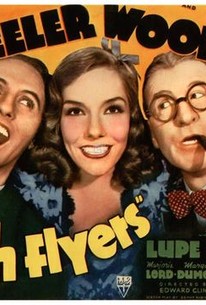 Bert Wheeler and Robert Woolsey's final film is far from their best, but at least it never plunges to the depths reached by their earlier Silly Billies and Mummy's Boys. Adapted from an unproduced stage play called The Kangaroos, High Flyers casts Bert and Bob as Jerry Lane and Pierre Potkins, operators of an amusement park kiddie-airplane concession. Newspaperman Dave Hanlon (Jack Carson) persuades the boys to fly out to sea to pick up a life preserver which purportedly contains precious photos taken by Hanlon of the British Royal Family. What our heroes don't know is that Hanlon is head of a gang of smugglers, and that the preserver contains stolen jewels and a cache of drugs. But what Hanlon doesn't know is that, despite their boasts, Jerry and Pierre have never flown a real plane in their lives. Upon scooping up the preserver, the boys accidentally open a package of cocaine powder, whereupon they become really high flyers (how this scene got past the censors is astonishing). They crash-land in the backyard of wealthy Horace Arlington (Paul Harvey), who fears that there's a sneak thief at large on his property (actually the "crook" is Arlington's pet dog). Assuming that Jerry and Pierre are the private eyes, he's summoned to his estate to protect the priceless Markoff Diamonds. Arlington gives the boys full reign over the household, allowing Jerry to romance Arlington's daughter Arlene (Marjorie Lord) and Pierre to spoon with household maid Maria (Lupe Velez). Things get really hectic when Hanlon and his fellow thieves converge on the Arlington household, demanding that Jerry and Pierre help them steal the Markoff gems -- or else. The whole mess is viewed with alarm by Arlington's eccentric wife Martha (Margaret Dumont), who fancies herself a fortune-teller. There are isolated moments in High Flyers that rank with Wheeler and Woolsey's best, notably Bert Wheeler's imitation of Charlie Chaplin and Bob Woolsey's song-and-dance duet with Lupe Velez. Also fascinating in a bizarre sort of way are Velez's impressions of Simone Simon, Dolores Del Rio, and Shirley Temple! All in all, however, High Flyers is a stilted, mechanical effort, garnering the team some of their worst reviews. Whether or not Wheeler and Woolsey would have been retained by RKO after the lukewarm box-office reception to this film is a moot point: Gravely ill with kidney disease, Robert Woolsey was confined to his bed after the film wrapped, where he remained until his death 14 months later. ~ Hal Erickson, Rovi

There are no critic reviews yet for High Flyers. Keep checking Rotten Tomatoes for updates!

There are no featured reviews for High Flyers at this time.