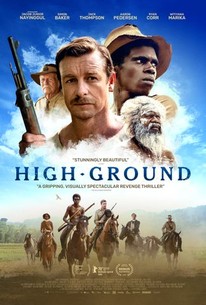 Critics Consensus: A gripping action story as well as sobering commentary on colonialism, High Ground is a vividly engrossing attempt to grapple with Australian history.

Critics Consensus: A gripping action story as well as sobering commentary on colonialism, High Ground is a vividly engrossing attempt to grapple with Australian history.

Critic Consensus: A gripping action story as well as sobering commentary on colonialism, High Ground is a vividly engrossing attempt to grapple with Australian history.

Travis never thought he would cross paths again with Australian indigenous Gutjuk, when he saved the life of this young child from the killings of the white men. Back from First World War, ex-sniper Travis recruits Gutjuk, now 19, to track down his uncle, the leader of the Aboriginal mob that terrifies the Territory. Travis has no choice but to trust the young Aboriginal and teach him to survive, while Gutjuk must take his life in his hands if he wants to find his place in between the white men and the Aborigines.

Indie Fresh List: I Carry You With Me, Werewolves Within, and Rebel Hearts

The ravishing cinematography by Andrew Commis explores the wild and rugged landscapes of Kakadu and Arnhem Land against which a powerful story of white privilege and aboriginal dispossession unfolds.

Between its evocative ensemble, fluid editing, and interest in Aboriginal culture, High Ground is worth a watch, even if it ultimately feels overshadowed by the message it's trying to send rather than being defined by the story it actually tells.

This movie makes a solid case as both a statement and an action picture.

Australian storytelling that packs a punch and pushes you to think deeply about the history of this country, High Ground captures the raw beauty of Arnhem Land as it does the brutality of colonialism.

High Ground doesn't quite have the epic sweep of Warwick Thornton's Sweet Country, nor the white hot fury of say Jennifer Kent's The Nightingale, but is nonetheless a powerful indictment on a past Australia has yet to reconcile as a nation.

To call it a timely film would be simplification. It's timeless -- a classic Australian account of the damage done by rampant colonialism. But it's only one chapter. Let's hope that there are many more to come.

High Ground is far from perfect. But it also isn't content to adhere to genre trappings; its thematic ambition and visual dynamic makes it worth a watch.

High Ground is a powerful and hugely effective film.

An impressive western which delves into the troubled history of post-colonial Australia to create a tense and powerful drama.

A disturbing Outback western about the ugliness of colonialism.

Whilst the story that emerges is ultimately pretty routine stuff, one should not underestimate the contribution that each one of this new generation of films makes to rebalancing the way that Australians think about their history.

It is the colonists against the people and the land in this lusciously shot thriller.

There are no featured reviews for High Ground at this time.