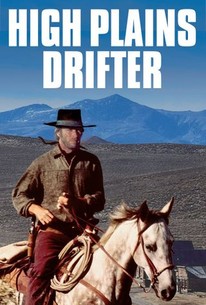 Critics Consensus: Clint Eastwood's sophomore outing as director sees him back in the saddle as a mysterious stranger, as the result is one of his most memorable Westerns.

Critics Consensus: Clint Eastwood's sophomore outing as director sees him back in the saddle as a mysterious stranger, as the result is one of his most memorable Westerns.

Critic Consensus: Clint Eastwood's sophomore outing as director sees him back in the saddle as a mysterious stranger, as the result is one of his most memorable Westerns.

"Who are you?" the dwarf Mordecai (Billy Curtis) asks Clint Eastwood's Stranger at the end of Eastwood's 1973 western High Plains Drifter. "You know," he replies, before vanishing into the desert heat waves near California's Mono Lake. Adapting the amorally enigmatic and violent Man With No Name persona from his films with Sergio Leone, Eastwood's second film as director begins as his drifter emerges from that heat haze and rides into the odd lakefront settlement of Lago. Lago's residents are not particularly friendly, but once the Stranger shows his skills as a gunfighter, they beg him to defend them against a group of outlaws (led by Eastwood regular Geoffrey Lewis) who have a score to settle with the town. He agrees to train them in self-defense, but Mordecai and innkeeper's wife Sarah Belding (Verna Bloom) soon suspect that the Stranger has another, more personal agenda. By the time the Stranger makes the corrupt community paint their town red and re-name it "Hell," it is clear that he is not just another gunslinger. With its fragmented flashbacks and bizarre, austere locations, High Plains Drifter's stylistic eccentricity lends an air of unsettling eeriness to its revenge story, adding an uncanny slant to Eastwood's antiheroic westerner. Seminal western hero John Wayne was so offended by Eastwood's harshly revisionist view of a frontier town that he wrote to Eastwood, objecting that this was not what the spirit of the West was all about. Eastwood's audience, however, was not so put off, and an exhibitors' poll named Eastwood a top box-office draw for 1973. ~ Lucia Bozzola, Rovi

Clint Eastwood
as The Stranger

Eastwood holds fast to the rebel spirit of the spaghetti Westerns and revisionist "New Hollywood" Westerns of the previous decade, but packages it in a film that's slicker and more mainstream-friendly.

As a director, Eastwood is not as good as he seems to think he is. As an actor, he is probably better than he allows himself to be.

This was supposed to be Eastwood's fond adieu to the worlds of Sergio Leone and Don Siegel; and indeed he cuts the operatic excess of the former with the punchy economy of the latter.

Part ghost story, part revenge Western, more than a little silly, and often quite entertaining in a way that may make you wonder if you have lost your good sense.

A funny, brutal, scary movie, daringly surreal in its mix of Western and horror themes.

I admit Mono looks phenomenal in this memorable piece where Eastwood spins off his Spaghetti Western persona during a violent round of vengeance.

A better black comedy-cum-allegory in which Eastwood (as both actor and director) expanded on the spaghetti template.

HIGH PLAINS DRIFTER is perhaps Eastwood's most mean-spirited film that deals with supernatural elements and quite literally burning down every cliche, the Western cliche that had predated "The Man With No Name.

A shaky sophomore effort for Eastwood. Ernest Tidyman's script all too often plays like an extended -- and inferior -- episode of The Twilight Zone.

Clint Eastwood's first Western as director is rather fascinating due to its quasi-supernatural component.

Eastwood at his most nihilistic and vicious. He comes out like an avenging ghost, a supernatural gunfighter collecting the souls of coward men for his return to the underworld. A feeling accentuated by an eerie musical score and strange oniric passages. An extremely satisfying cross between western and horror, well learnt craft from his masters Leone and Siegel.

The Stranger fails to match up to The Man With No Name. But still it's a solid enough western flick. With a pinch of super-natural tone, High Plains Drifter is a gruesome blood-bathed ride, quite eery at times.

There's not many western/ghost stories in the movies despite the rich american tradition of the same ... and this tale of ominous revenge (a precursor to "pale rider") never fails to chill, time after time.

This isn't your standard western in the slightest, which is why it works so well. I can't say too much beyond that without spoiling one of the coolest western plots ever written. Highly re-watchable thanks to a very clever script (without saying too much, when the Stranger speaks, take his words seriously). This is probably my favorite western film, so give it a shot.