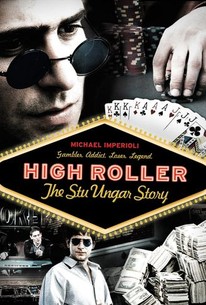 The true story of one of the most gifted card players in history provides the basis for this hard-hitting drama. Stu Ungar (Michael Imperioli) was barely in his teens when he first discovered his talent for playing cards, especially poker and gin rummy. His father, a nightclub owner and small-time bookmaker connected with the mob, was impressed with his son's abilities but worried where Stu's reckless instincts towards gambling could take him. As it happens, Stu's father was right to worry; the boy managed to lose all his bar mitzvah money during an afternoon at the racetrack (for all his skills at the card table, Stu had no talent for picking the ponies), and by the time he was 20, Stu was deep in debt to mob loan sharks. Vincent (Michael Nouri), a mob boss who knew Stu's father, gives him a chance to pay off his debts by entering a gin rummy tournament in Las Vegas; Stu wins big and soon finds the Las Vegas lifestyle is to his liking. Stu becomes something of a celebrity when he wins the World Series of Poker tournament in 1980 and 1981, but his appetite for racetrack betting, drugs and prostitutes took its toll, and the great card shark hit bottom before returning from nowhere to win the WSOP a third time in 1996; however, Stu's comeback would turn out to be tragically short lived. High Roller: The Stu Ungar Story also features appearances by Pat Morita, Renee Faia, Joe La Due, and Vincent Van Patten.

Joe La Due
as DJ

Michael Pasternak
as The Stranger

Al Bernstein
as Himself

Think of it as sitting on a Jack-eight. Off suit.

As the poster tells us four things about Stuey ("Gambler. Addict. Loser. Legend") it's disappointing that the final film can only fulfill on three of the four.

There are no featured audience reviews yet. Click the link below to see what others say about High Roller: The Stu Ungar Story!