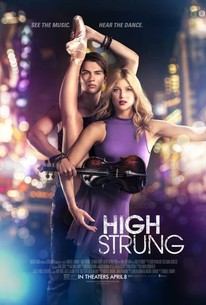 Ruby Adams (Keenan Kampa) is a dancer from the Midwest on scholarship, living her first day in New York City. Johnny Blackwell (Nicholas Galitzine) is a British musician, playing for money in the subway tunnels. Ruby's world is classical and disciplined; Johnnie's is improvisational and street smart. When a hip-hop battle gone wrong throws these two artists together, they immediately clash but can't deny it when sparks begin to fly. Their lives quickly get entangled in the pitfalls that come with competing in New York City. With the help of a dynamic dance crew called The SwitchSteps, Ruby and Johnnie must find a way to save Ruby's scholarship and keep Johnnie from being deported. In an action-packed extravaganza combining cutting edge hip-hop with contemporary and classical dance, the two must navigate their opposing worlds and prepare for a competition where winning or losing will change their lives forever. HIGH STRUNG is elevated by standout supporting performances from veteran actors Jane Seymour, Paul Freeman and Maia Morgenstern and features an original soundtrack of boundary-breaking commercial tracks blending styles of music in a way that already has the dance industry and social media talking. The film's original take on familiar musical genres sets it apart from prior dance franchises: Step Up and Street Dance. It's brought to viewers by Broadway stars Michael and Janeen Damian and top choreographer Dave Scott (Step Up 3D; Stomp the Yard; resident choreographer on So You Think You Can Dance; guest choreographer on Dancing with the Stars) and introduces the breathtakingly talented Keenan Kampa (Russia's Mariinsky Ballet's first American dancer) and Nicholas Galitzine (The Beat Beneath My Feet) alongside 62 of some of the World's most exciting and original dancers from London, Paris, L.A. and New York.

Simon A. Mendoza
as Ollie

Tomi May
as Detective Mullen

Cristina Gazner
as One Of The Parents Of The Students

Cliff Michel
as Thug
View All

Arts movie High Strung has a goofy script and a clichéd plot, but the dance sequences and musical performances are memorable, ambitious, and highly enjoyable.

"High Strung" wears its tired let's-put-on-a-show clichés as if they were neon turquoise leg-warmers.

Sure, this is all a familiar tune - but it's still catchy.

The story strings pearls of performance on the flimsiest of plots.

What it loses in thematic richness, the uncynical High Strung makes up for in pure joy.

As in love with dance as The Red Shoes, this spinning, leaping and quite fun dervish of a film should prove an audience pleaser.