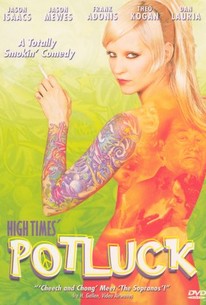 A veteran mobster discovers the grass is greener on the other side in this broad independent comedy. Frank (Frank Adonis) is a 60-year-old Mafia lieutenant who has been entrusted with a suitcase full of high-quality marijuana that has arrived in Manhattan from the Deep South and is ready for sale. Frank, however, happens to make the acquaintance of Jade (Theo Kogan), an attractive young woman who sings with a punk-rock band. Jade turns Frank's head, and she, in turn, samples the wares from Frank's suitcase. Jade persuades Frank to try some of the weed, and before long he has a decidedly more forgiving attitude about life and those around him. Frank's new laid-back personality, however, doesn't go over well with his bosses, especially after the stash he was given goes missing and ends up being stolen and re-stolen by a dizzying variety of underground personalities. High Times' Potluck -- which, as the title infers, was produced and financed in part by the well-known marijuana advocacy magazine -- also stars Jason Mews, Frank Gorshin, Sylvia Miles, and Jason Isaacs; noted cannabis enthusiasts Tommy Chong and David Peel also make cameo appearances.

Frank Gorshin
as The Slim Man

David Peel
as Himself

A witless collection of stereotypes and clichés.

First-time Australian director Alison Thompson was either dipping a bit too heavily into High Times' stash on the job or really doesn't have a clue what she's doing.

Some viewers may opt to forego the glassy-eyed actors' mush-mouthed line recitations and listen to Dark Side of the Moon on their Discmans to see if anything weird happens.

It could prove a wonderful test case for the therapeutic benefits of medicinal marijuana. For if weed can dull the pain, headaches, fatigue and crushing boredom that result from this so-called film, surely it can cure anything.

There are no featured audience reviews yet. Click the link below to see what others say about High Times' Potluck!