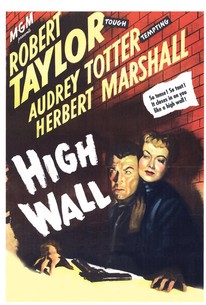 Former army pilot Robert Taylor is accused, on the basis of strong circumstantial evidence, of his wife's murder. Suffering from periodic blackouts, Taylor isn't so certain of his innocence himself. When offered a brain operation, Taylor refuses, knowing that if he is proven sane he will be executed for murder. Instead, he opts for confinement in a high-walled veteran's mental institution. A compassionate lady doctor (Audrey Totter) falls in love with Taylor, convincing him to have the operation. Even after emerging from the ether, Taylor cannot remember any of the details concerning his wife's death--but he does recall that the dead woman had recently taken a job with a publisher (Herbert Marshall) of religious books. While the killer's identity is tipped off by this revelation, the audience is never certain that Robert Taylor isn't a murderer--especially since he'd previously appeared as a homicidal maniac in the 1946 film Undercurrent. The best moment in High Wall is the casual disposal of the sole witness to the murder, via a long, dark elevator shaft.

Herbert Marshall
as Willard I. Whitcombe

Robert B. Williams
as Deputy

Jack Worth
as Orderly

Frank Darien
as Old Man in the Tub

Ray Teal
as Lieutenant of Police

Jack Baxley
as Bartender
View All

A tepid and chatty psychological melodrama.

There are no featured audience reviews yet. Click the link below to see what others say about High Wall!