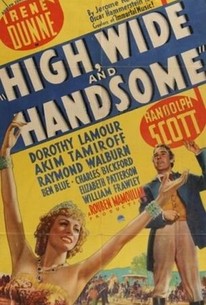 High, Wide and Handsome almost defies classification: Perhaps it's best referred to as a historical musical western comedy melodrama. Irene Dunne plays an itinerant circus performer who marries oilman Randolph Scott. The couple heads to Titusville, Pennsylvania in 1859, where Scott is among the lucky prospectors who strikes oil. With no train service to the refineries, the townsfolk are obliged to build a pipeline, which is accomplished to the accompaniment of several rousing musical numbers by Jerome Kern and Oscar Hammerstein. The villainous element is represented by Alan Hale, who does his best to block the project to serve his own evil ends. Dunne's old circus friends come to the rescue with a herd of trained elephants! High Wide and Handsome confused too many filmgoers to make money in 1937; today it's regarded in some circles as a classic.

High, Wide and Handsome is a fine film - beautiful to look at, stylish and very entertaining. It gets better every time I see it, too.

There are no featured audience reviews yet. Click the link below to see what others say about High, Wide and Handsome!