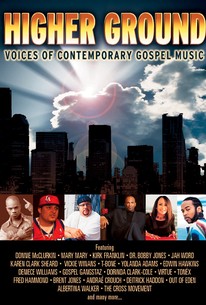 Many gospel music artists exist in an double bind -- like nearly all musicians, gospel performers are influenced by the sounds around them, and many of the most creative artists are interested in taking their work in new and challenging directions. However, gospel is also music that serves to honor the Lord, and many strict Evangelical Christians are deeply wary of the influence of secular music in the gospel community, to the extent than a few notable sacred artists who have incorporated rock, soul, and rap accents have found themselves accused of heresy and worse. Higher Ground: Voices of Contemporary Gospel Music is a documentary that focuses on cutting-edge gospel artists, both past and present, as they explore both their faith and new horizons in faith through their artistry and deal with reactions both positive and negative. Artists profiled include Kirk Franklin, Mary Mary, Edwin Hawkins, Gospel Gangstaz, Jah Word, Dr. Bobby Jones, Fred Hammond, T-Bone, and many more.

There are no critic reviews yet for Higher Ground: Voices of Contemporary Gospel Music. Keep checking Rotten Tomatoes for updates!

There are no featured reviews for Higher Ground: Voices of Contemporary Gospel Music at this time.