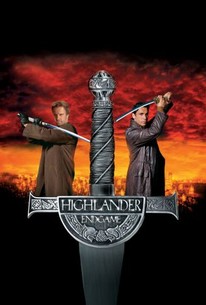 Critics Consensus: The fourth and supposedly last Highlander movie is a confusing mess, complete with bad acting and dialogue.

Critics Consensus: The fourth and supposedly last Highlander movie is a confusing mess, complete with bad acting and dialogue.

Critic Consensus: The fourth and supposedly last Highlander movie is a confusing mess, complete with bad acting and dialogue.

In this fantasy adventure tale, Connor MacLeod (Christopher Lambert) and his kinsman Duncan (Adrian Paul) are "Immortals," members of a secret clan who can be killed only through decapitation. Connor and Duncan find themselves thrown into a tournament where Immortals both good and evil battle one another in a bid to become the last of their kind. Highlander: Endgame was the fourth feature film in the Highlander franchise, but its narrative draws from the storyline of the Highlander television series and ignores the events of the second and third films.

Charmian May
as Lady

Highlander: Endgame looks sensational, moves like lightning. But its script (by Joel Soisson) makes no pretense about being logical or even comprehensible.

Highlander: Endgame is truer to the original than the sequels, but it plays more like a television program than a theatrical release, which will matter little to the die-hard fans.

Och, lads and lassies, on the souls of our shape-shifting Gaelic forebears, do not enter unwarned into that dark cave of confusion known as Highlander: Endgame.

It quickly goes astray with fight scenes laden with too many bullets, too many explosions, too many sparks, lightning bolts and weird lights -- and too many impalings.

We're left to endure this banquet of bad acting and worse dialogue with no relief save for your inner-heckler.

Thinking (logically or otherwise) about this movie is a waste of your brain cells.

This is the last one in this long dead franchise...unless they do something stupid.

We have a sad attempt at action which fails miserably.

...do not under any circumstances rent this if you've never seen the Highlander TV series.

Thanks to its motley collection of story elements, settings, and acting styles, leaving this film is like getting off an amusement park ride you never wanted on in the first place.

An awesome and spectacularly entertaining action-packed thrill-ride. A dazzling, thrilling and breathtaking movie. A worthy sequel combining both the film and television franchisees together in one great flick. Loaded with great fight scenes and swashbuckling sword-play. A film of great passion, emotional power, character studies and gripping storytelling. The most powerful and unforgettable film in the series. Adrian Paul and Christopher Lambert are magnificent, the chemistry between the two is flawless. A nice slice of great popcorn action movie fun. An instant classic. My favorite Highlander movie ever.

I'm a big fan of the first Highlander movie but I can't say I watched the tv series. So I guess I was just kinda indifferent when I heard that a movie/series crossover film was being made. The two previous Highlander sequels were a mixed bag(Highlander 2 gets my vote as one of the worst films ever made). I have to say that Endgame is not a awful film, but that, ultimately, is not much to boast about either. This sequel feels more like a movie of the series than a sequel to the other movies. Christopher Lambert (The original Highlander) reprises his role as Connor Macleod and Adrian Paul stars as his distant cousin Duncan Macleod (hero of the TV series). The two cousins must join forces if they are to stop the ultimate immortal, fellow Highlander Jacob Kell from winning the prize. Although Connor Macleod is in this movie, this is definitely Duncans movie. The movie starts off well enough.... Connor's adopted daughter (whom he saved in the first movie) is murdered in an explosion by an unknown enemy, and Connor goes into seclusion, not wanting to bring death to those around him. Through flashbacks, we then see why this murder took place. The Clan Macleod, after banishing Connor from Glennfinnin, put Connors mother on trial for heresy (giving birth to the spawn of Satan) Connor returns to the village to stop them burning her at the stake but is too late. In anger he kills two priests, a father and son. However the son, Jacob, comes back as an immortal hell bent on revenge. Back in the present Duncan is having visions of Connor and employs the help of his friends Methos and Dawson to help track Connor down. They find out Connor went into seclusion in a place called the Sanctuary, a prison for immortals who no longer wish to participate in the game. When the Sanctuary is attacked and all its inmates killed, Duncan fears the worst and goes in search of Connors body. However, Connor is still alive and meets up with Duncan. Since his murder at the hands of Connor, Jacob has become the ultimate immortal, with many immortal kills (More than Connor and Duncan combined we later learn) and its up to the Macleod cousins to stop him. Connor and Duncan confront Kell and Connor and Kell fight. Connor is defeated, but again, left alive as Jacob Kell wants he and Connor to be the last immortals left. Kell announces that he will kill all the people that Connor holds dear, and with Rachel dead Duncan is the only person in the world Connor "gives a damn about". Duncan is on borrowed time. Unfortunately, after this scene the movie goes downhill fast as we are subjected to a pointless subplot for the next 50 minutes involving Duncan and his ex-wife Kate (now called Faith), who is played by an actress employed more for her looks and willingness to get naked than for her acting ability, it seems. Duncans ex-wife has teamed with Kell in a bid to get revenge on Duncan, who killed her years ago and made her an immortal too. The story then turns into a trifle of melodramatics and love triangles between Duncan, Kate and Kell take up too much valuable screen time that could and should have been used to focus on the Connor/Kell feud. Connor is absent throughout much of the middle of this movie and Duncan is left to fill it with brooding and Paul's questionable acting talent Another detractor from the movie is Kells band of sidekicks, a motorcycle riding band of cheap, camp, fodder..all with their own ridiculous costumes and unique "weapons". Even the usually great Donnie Yen is wasted, and apart from his one fight scene with Duncan, does nothing much else for the whole movie but sit there. (total waste of his talents). And the idea of immortals working for another immortal baffles me to no end but I'm not a huge fan of the Highlander series outside of the 1st film so maybe a Highlander fan more in the know could explain this to me. All in all this movie was very badly written for the most part and not enough time is devoted to Connor after the first half hour. The last 20 minutes are okay, when the two Macleods make the ultimate decision on how they will stop Kell, and the final fight is good (if badly edited). I would skip this one unless you are a die hard fan of the films and have watched a lot of the series.

TV and movie series clansmen Duncan and Connor MacLeod, respectively, must decide who will decapitate the other to magically gain the necessary strenght to prevent a renegade from becoming Earth's only immortal in this incoherent, century-hopping, globe-trotting meeting of Good and Evil.

A passing of the torch from the movie to the tv show cast. Not bad.