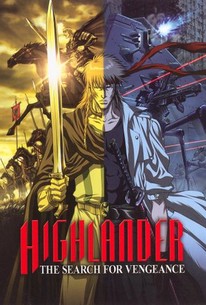 His lover Moya mercilessly slain by immortal despot Marcus Octavius, lone warrior Colin sets out alongside wise cracking apparition Amergan on a restless revenge mission in this animated installment of the long-running Highlander saga. It's been tens of centuries since Colin's one true love was taken from him in the flash of a sword, yet the pain of losing her is still as powerful as it was on that damned and fateful day. Roaming the desolate Celtic plains in hopes that dispensing with Octavius will allow him to let go of the hate that threatens to consume him, Colin soon meets up with beautiful but fearsome freedom fighter Dahlia. It seems that Dahlia has some strange connection to Moya, and if only Colin could place it he may come one step closer to solving the mysteries of the past. Now, as Marcus finally crosses swords with the powerful target of his all-consuming vengeance, the fate of the future will be decided by the outcome of a battle centuries in the making.

There are no critic reviews yet for Highlander: Search for Vengeance. Keep checking Rotten Tomatoes for updates!

I haven't seen Highlander yet the live action film but I will soon I just ordered both first and second. Once I get zombie and zombie 3 then it will come. Highlander I have heard were some very poor movies but I heard the first was good but the second was one of the worst ever. My dad says- "WORST FUCKING PIECE OF SHIT EVER" But he said to me see the first movie. I saw there was an animated version of it down the road so I decide to take a look. The lone warrior Colin travels with the wise-cracking ghost Amergan through the ages searching for the immortal despot Marcus Octavius, who killed his lover on the Celtic plains tens of centuries ago. On his quest, he discovers New York is submerged, and one dominant monolith fortress towers over the seas. Colin can save the survivors, but his sword only hungers for the blood of one man. Despite many lifetimes of training, Colin has failed to vanquish Marcus on the great battlefields of history. Can he finish what he started and stop Marcus? Will Colin lead the people to freedom or become consumed by hate? But overall I did really enjoy it despite its rapid flashbacks throw the years witch can be confusing. 80% for story it's very interesting to see immortals struggle in a modern day society and into the future. 70% for acting and dubbing I read that the movie was mainly American audiences despite it being anime and made here. 70% for animation it rather looks fantastic sometimes but other time it's just okay. 90% for characters there is lots of information on them and a lot on Colin our immortal and he is shown throughout the years he has been alive. 80% for everything else. I am still looking forward to watching the live action films on blue ray that should be interesting. Keiko's score 85-100

What caught my eye was that the animators of this film are the same ones that worked on Cyber City Oedo 808. I was never very interested in the Highlander series but this installment was entertaining. The best part was probably when Colin engages the future soldiers. The computer animation was pretty cool. But other than that, this film was just okay.

Alright.. enjoyed it.. Different from the real thing though.. The real one is still better for me ^_^

I liked the story and the new characters were pretty cool. It is a nice addition to the Highlander mythos without stepping on the toes of the other movies and tv show. The battle between the two immortals as it stretches over time was really cool to see and the film flowed well. I'm not a huge fan of the art style but it lent itself well to the feel of the story. I reccommend this one for fans of the series and even for the sci fi fans. You don't need to have seen the movies to get into this one.