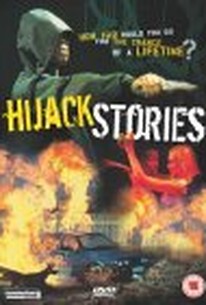 One man's dedication to "learning by doing" has dangerous consequences when he tries to land a TV role as a criminal in this drama set in South Africa. Sox Moraka (Tony Kgoroge) is a young actor from a comfortable, middle-class background who thinks he may have gotten his big break when he auditions for a television series, playing the roughneck leader of a township street gang . However, Sox flubs the audition, and the producers inform him he's just not convincing in the role. Eager to prove that he can play "street" if he wants to, Sox connects with Zama (Rapulana Seiphemo), a friend from childhood who is now a hard-core gang banger, and asks Zama to show him the ropes. While it soon becomes obvious to Zama and his partners Joe (Makhaola Ndebele) and Fly (Percy Matsemela) that Sox is out of his element on the streets, Sox is determined to prove himself -- so much so that he crosses the line from observer to active participant, putting himself in grave danger. Hijack Stories was shown at the 2000 Toronto Film Festival, where it opened the "Planet Africa" series. ~ Mark Deming, Rovi

There are no critic reviews yet for Hijack Stories. Keep checking Rotten Tomatoes for updates!

There are no featured reviews for Hijack Stories at this time.