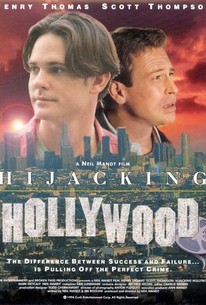 A hopeful film school graduate learns a few painful lessons about Hollywood ethics after travelling to Tinseltown to work for the dictatorial movie mogul to whom is he is distantly related. Idealistic Kevin Conroy dreams of getting his script, "Two Days in the Salt Mine" produced, but lacks the money, and so is willing to perform the most menial tasks for his relative Michael Lawrence, a major player among Hollywood producers. The slightly sadistic Lawrence, who is in the process of making his latest epic, "Moby Dick 2: Ahab's Revenge," hires Kevin as a minimally-paid 'gofer' to work under Russell, a brown-nosing and petty fellow who is a little too delighted to boss someone else around. Russell has Kevin running all over L.A. doing mindless chores, but he also has Kevin perform one very important task: collecting dailies flown in from Hawaii. Kevin shares an apartment with Tad, a bit of a hustler with an expertise in manipulating people. One day Kevin comments upon the ease with which he could simply hijack the invaluable dailies and hold them hostage. Tad takes him seriously and together they hatch an outrageous plan to get money needed for Kevin's film. Their carefully laid plans, however, yield unexpected results.

There are no critic reviews yet for Hijacking Hollywood. Keep checking Rotten Tomatoes for updates!

Henry Thomas (E.T) is a young college grad, who goes to Hollywood hoping to make a script that he wrote into a movie. He ends up taking a job as a Production Assistant on a big budget film called Moby Dick 2.His roommate Tad, works out a scheme to kidnap the film and hold it hostage for about $150,000. A scathing satire that would be funnier if you're familiar with the inner workings of the film industry.