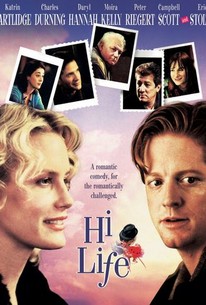 Roger Hedden wrote and directed this indie romantic comedy about a group of New Yorkers on the Upper West Side as Christmas nears. Unemployed actor Jimmy (Eric Stoltz), who owes $900 to local bookie Fatty (Charles Durning), tells his girlfriend Susan (Moira Kelly) that the money is for an abortion for sis Maggie (Daryl Hannah) -- who jilted bartender Ray (Campbell Scott). Ray and one of his regular customers April (Katrin Cartlidge) visit bars trying to raise the money, and eventually a half dozen others are drawn into the treasure hunt. Shown at the 1998 Mill Valley Film Festival and the 1998 Chicago Film Festival.

Tucker Smith
as Adrien
View All

An enjoyable little trifle, and you can't help but think Hedden wasn't aiming for much more.

Most of the performances feel both spontaneous and lived-in, particularly Scott's exasperated romantic.

...an enjoyable if altogether forgettable comedy...

About as exciting as it sounds.

Not good. Boring story, barely managed to keep my attention. Typical straight to video b-grade movie. To be honest, I was only watching for Michael Pitt's bit part in it though. LOL. One and a half stars for that half minute - half a star for the rest of the movie!