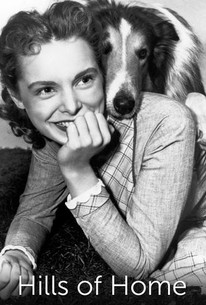 MGM's Lassie series was declining in popularity by 1948, so the studio decided to release its latest adventure of the famous collie as Hills of Home, so that non-Lassie fans might be inveigled into entering the theatre. Actually, Hills is one of the best entries in the series, due in no small part to the engaging performance by Edmund Gwenn. Playing a Scottish doctor, Gwenn adopts Lassie, who in this film has an unnatural aversion to water; she'll drink it, but won't swim in it. Gwenn spends most of the film trying to cure Lassie of her fears, but she remains water-shy until Gwenn's life is put in danger and the dog is forced to dive into a raving river. The doctor dies as the result of the ordeal, but not before beneficently passing on Lassie's ownership to romantic leads Janet Leigh and Tom Drake. Lensed in restful Technicolor, Hills of Home was based on Ian McClaren's Doctor of the Old School, which had previously been filmed without Lassie in 1923.

Lassie the Dog
View All

Critic Reviews for Hills of Home

There are no featured reviews for Hills of Home at this time.