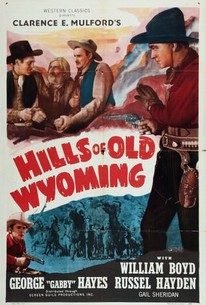 Hills of Old Wyoming was the 10th entry in the "Hopalong Cassidy" series, and at 79 minutes one of the longest of the batch (beaten out only by the 82-minute Borderland). William Boyd and George "Gabby" Hayes are back as Hoppy and Windy, but handsome sidekick Johnny Nelson (James Ellison) has been replaced by Lucky Jenkins (Russell Hayden, who remained with the series until 1941). The plot focuses on an Indian reservation where the residents are being victimized by villainous deputy Andrews (Stephen Morris, aka Morris Ankrum). Fomenting a range war between Indians and cattlemen for his own profit, Andrews is foiled by Hoppy and company. Former silent screen star Clara Kimball Young is given a few moments to shine in the minor role of Ma Hutchins.

John Powers
as Smiley the Cook

Jim Mason
as Deputy
View All

There are no critic reviews yet for Hills of Old Wyoming. Keep checking Rotten Tomatoes for updates!

There are no featured reviews for Hills of Old Wyoming at this time.