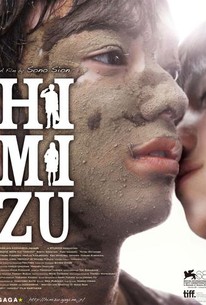 Sion Sono (Suicide Club, Cold Fish), adapts Minoru Furuya's popular manga to tell the confrontational tale of a troubled adolescent boy whose dreams of an ordinary life are slowly eroded in the aftermath of the Tohoku earthquake and tsunami. Fifteen year old Sumida (Shôta Sometani) and his mother run a small boat rental business on the outskirts of the city. They don't get many customers, but the presence of some local homeless people on their property ensure that there's rarely a dull moment around the shop. Meanwhile, at school, Sumida's classmate Keiko (Fumi Nikaidou) makes no secret of her massive crush on him. When Sumida's mother decides to abandon both the business and her son, Keiko and the other locals team up in an attempt to spruce up the boat house, and lure in some new clientele. But when Sumida's drunken, physically abusive father repeatedly shows up to berate the beleaguered teen, and a vicious crime boss appears seeking to collect on a lingering debt, the volatile situation quickly begins to boil over. ~ Jason Buchanan, Rovi

Takahiro Nishijima
as You

The setting is simultaneously breathtaking and heartbreaking.

Himizu is still not an easy film to like, but the topicality of its message about national pain and rebuilding could attract some offshore sales following its Venice and Toronto debuts.

[Mr. Sono] gives the film a harrowing cacophony and a sense of trauma with sound effects, including subtle echoes.

Sion Sono's film is a vision of coming of age as trial by fire, a thunderous encapsulation of that period of transition in which adolescents try to discover themselves: their passions, their purpose, their sense of morality.

Sono retains his go-for-the-throat approach, but the violence here somehow connects with the brutal economic conditions, and he fosters very tender, affecting performances from Shôta Sometani and Fumi Nikaidô as his crushed young lovers.

It's the compelling duo at the center of the film that lends a sincerity often absent from Sono's oeuvre.

Sono has successfully fashioned through his endearingly distinguishable style a harrowing allegory of a damaged society which both screams out for a drastic political change whilst also presenting a vigorously absorbing revenge tragedy.

The overheated emotions and overamped screeching would have soon become unbearable if Sono hadn't also carefully stylized everything from the acting to the art direction - a welcome (if thin) form of visual and mental insulation.

An important, and fitfully great, picture.

Despite the almost nonstop drumbeat of human cruelty, there's a surprising core of sweetness to Himizu...This is a movie that uses hopelessness as a way to explore hope.

Occasionally heavy-handed in the delivery of its ideas, but also a refreshingly sensitive character study.

Not quite what I expected. Well acted, but a lot of violence and extremely bleak. I get that it's probably a metaphor for the tsunami which has affected the lives of many of these characters, but even so, it's a hard one to warm to. The slapping around of the 14 year old girl made me uncomfortable to watch too. I realize she slaps him also, but he starts it. A lot of unlike able characters in this.

One of my increasingly favourite directors, Sion Sono, delivers this bizarre but heartfelt look at two adolescents struggling with what life has to offer them. Sumida must look after his family's boathouse after his parents leave. Now and again his drunk father returns to remind him that he would have been better of if Sumida had died, then he could have obtained the insurance. It's that kind of film. Sure, it's predominantly wrapped up in darkness, but there is heart and beauty also to be found. Sumida is reluctant to let anyone in, and only wishes for a 'normal' future. A series of events lead to stabbings, yakuza, rock collecting, and fighting a nazi. It's a strange film, but the strangest thing of all is how real it all feels. Set against the backdrop of the aftermath of the Tohoku earthquake and tsunami, the film has a distant feel but gradually lets you in and enjoy the characters. Certainly more than your average film.