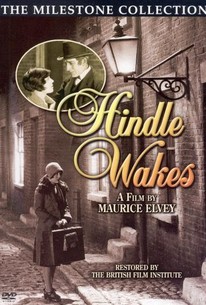 Based on the stage play by Stanley Houghton, this silent film by Maurice Elvey tells the story of a factory girl named Fanny (Estelle Brody) who takes a short vacation to Blackpool, sometimes called "England's Coney Island." There, she meets the rich and handsome Allan (John Stuart), whose father owns a mill. They take a liking to each other and spend some time alone, all the while trying to keep their fling a secret to escape its societal consequences. The plan eventually backfires, however, and Fanny's parents find out about the affair, confronting Allan's father and demanding that he force his son to marry Fanny. Allan's father agrees, but it is Fanny's surprising decision about the matter that has earned Hindle Wakes its reputation as one of the first feminist works of literature in the 20th century.

A remarkable synthesis of proto-feminist ideals and visionary aesthetics.

There are no featured reviews for Hindle Wakes at this time.