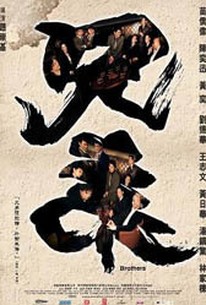 Tim Allen stars and handles writing duties with Matt Carroll in this Buena Vista comedy that deals with multiracial adopted brothers who partner up after being framed for a crime they did not commit. ~ Jeremy Wheeler, Rovi

There are no critic reviews yet for Hing dai (Brothers). Keep checking Rotten Tomatoes for updates!

At first glance this film looks like it has potential to really be worth the watch, but at the end of the day it falls flat. Even Chinese crime drama fans may think the same.

The concept for the plot is the ever-so-popular drug gangster cop showdown. The twist with this one is that the story revolves around 2 brothers. While this isn't all bad, the pace is what kills this film. Yes, this movie is a slow dragger and I mean really slow. For the first hour it feels like nothing special is happening and all that you get is a long stretch of character buildup. From that perspective it is successful, but it is not what people need or want to see. By the time something interesting happens it is already too late because more than half the film has gone by. It just isn't worth the wait.

Unlike other movies of this type, there are no extensive shootouts. The only action comes in the form of a decent car chase, followed by a small shootout a little before the end. There is also a short standoff at the very end. None of this is anything to write home about. Do not watch this film for the action.

The best part of this film is the cinematography. It is excellent and thanks to that this movie ALMOST feels like Johnnie To is a part of this. Too bad he isn't attached to this film in any way.

The acting is good and there are a bunch of recognizable faces. Andy Lau gives the best performance, and surprisingly, he isn't even the lead. Nobody else really stands out.

Unless you are a huge fan of these run-of-the-mill crime dramas feel free to pass on this.