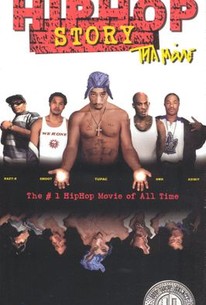 Since the mid-'70s, hip-hop music has evolved from a street corner phenomenon based in New York City to a sound and style that has made its mark on nearly every level of popular culture around the world. Hip Hop Story: Tha Movie is a documentary which examines the rise of hip-hop and rap music, and in particular the impact of hardcore gangsta rap. Along with segments on such departed hip-hop legends as Eazy-E, Tupac Shakur, and The Notorious B.I.G., Hip Hop Story: Tha Movie also features interviews with Snoop Dogg, KRS-One, Master P, and a number of other major players in the hip-hop scene, some performers and others behind-the-scenes figures.

There are no critic reviews yet for Hip-Hop Story: The Movie. Keep checking Rotten Tomatoes for updates!

There are no featured reviews for Hip-Hop Story: The Movie at this time.