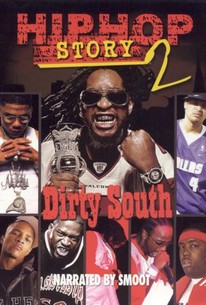 While the East Coast and the West Coast hip-hop scenes were waging a war for supremacy of the rap game, Southern MCs and DJs began creating a sound and style all their own, and soon artists such as Master P, Mystikal, Silkk the Shocker and many more were letting the world know that the "Dirty South" scene was no longer an underground phenomenon. Rapper Smoot is the host for this documentary which offers a look the latest wave of Dirty South artists such as Lil Jon and the East Side Boyz, the Ying Yang Twins, and David Banner, as well as offering a tour of hot spots in Atlanta, Miami, and Houston. The Hip Hop Story, Vol. 2: Dirty South also takes a look at such Southern-influenced Midwestern acts as Nelly and Chingy.

There are no critic reviews yet for Hip Hop Story, Vol. 2: Dirty South. Keep checking Rotten Tomatoes for updates!

There are no featured reviews for Hip Hop Story, Vol. 2: Dirty South at this time.