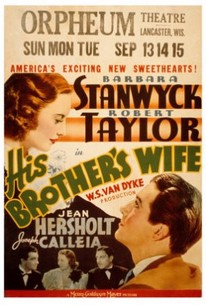 In this polished soap opera from MGM, Robert Taylor plays Chris Claybourne, a dedicated scientist researching a possible cure for spotted fever. However, Chris has a dark side; he has a weakness for gambling and has fallen into debt with a gangster named Fish Eye (Joseph Calleia). While visiting a casino, Chris meets Rita Wilson (Barbara Stanwyck), a gambler's shill who does some modeling on the side. Chris and Rita quickly fall in love, and when Chris is due to leave for South America on a research expedition, Rita begs him to stay with her. However, Fish Eye has been leaning on Chris for his money, and when he asks his brother Tom (John Eldridge) for a loan to pay off the debt, he agrees under one condition -- that Chris leave for South America right away, and without Rita. When Chris ships out, Rita believes that he left her behind because he didn't care for her, and to hurt him, she marries Tom and takes Chris's IOU. However, by the time Chris returns, Rita's marriage with Tom is in tatters and she's desperate to win back Chris's affection. In real life, Robert Taylor and Barbara Stanwyck were an item while shooting His Brother's Wife, and they married three years later. ~ Mark Deming, Rovi

Critic Reviews for His Brother's Wife

Everyone in the picture is so awfully straight-backed...

The film has its exciting moments, but it's hard to feel much sympathy with any of the people involved.

Audience Reviews for His Brother's Wife

This movie is decent enough in the beginning, which has a wealthy playboy doctor (Robert Taylor) falling in love with a woman he meets in a casino (Barbara Stanwyck). He's meant to leave for the jungles of South America in ten days to work on a cure for spotted fever, so it's a whirlwind romance that they both know will be short-lived. Things get complicated when they fall in love (surprise, surprise), and even more so as Taylor owes the casino owner (Joseph Calleia) money, and seeks to borrow it from his brother. The film gets muddled from there - in character motivations, in melodrama, and in several dangling threads. The scenes in the jungle are just silly, and it's irritating when the woman starts taking the blame for things. I found my grade for the film steadily decreasing as it progressed, and hoping for it to end, which is never a good sign. It was interesting to see Samuel S. Hinds as the father, as he was George Bailey's dad in 'It's a Wonderful Life', and it was also interesting to consider that Stanwyck and Taylor would be married in real life three years later, for thirteen years. This one is for a fan of those actors only, and seeing the first thirty minutes or so would be sufficient.

Silly nonsense that Barbara makes worth watching. Robert Taylor was extremely good looking but at least at this point was a seriously bad actor.