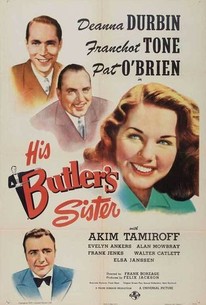 In this romance, an Indiana girl travels to the Big Apple to fulfil her dream of becoming a singer. There she intends to visit her half-brother who said that he was a wealthy businessman. In reality, he is the chief valet for a famous composer. The girl, wanting the composer's help in establishing her career, is hired on as a domestic servant by her brother. Unfortunately, when the protective valet begins believing that the composer is interested in her, he fires her. His suspicions were correct and the two do indeed become romantically involved. His attempts to break them apart are futile and the film ends on a happy note. Songs include: an aria from Puccini's "Turandot," a medley of Russian songs, "In the Spirit of the Moment," and "When You're Away."

Iris Adrian
as Girl on Train

Russell Hicks
as Sanderson
View All

Critic Reviews for His Butler's Sister

The movie amuses and entertains, [Full review in Spanish]

This romantic comedy holds more vague, plushy charm than many a Durbin film.

Audience Reviews for His Butler's Sister

There are no featured audience reviews yet. Click the link below to see what others say about His Butler's Sister!