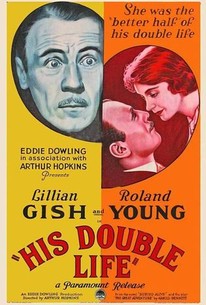 His Double Life is a sweet, charming adaptation of the venerable Arnold Bennett play Buried Alive. Roland Young plays Priam Farrell, a famous and reclusive artist who is loath to return to London to accept a knighthood. Hoping to drop out of sight, Farrell trades identities with his recently deceased valet. So far as the world is concerned, Farrell himself has died, allowing him to start life all over again with spinster Alice (Lillian Gish), whom he -- or rather the man he is pretending to be -- had been corresponding with through a matrimonial bureau. Complications arise when the dead valet's family pops up with the intention of accusing Young of bigamy! Filmed at the Astoria Studios in Long Island, His Double Life was for many years withdrawn from circulation because of its 1943 remake, Holy Matrimony.

Critic Reviews for His Double Life

There are no featured reviews for His Double Life at this time.