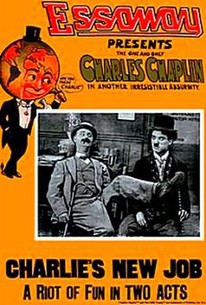 Charlie Chaplin began his new job at Essanay Studios, who lured him away from Keystone with an offer of $1250 a week plus a bonus of $10,000, with a parody film on his former employer. It features two actresses at the beginning of their careers in minor roles -- Gloria Swanson and Agnes Ayres. Charlie applies for work at the Lockstone Motion Picture Company. Arriving at the office just after him is cross-eyed comedian Ben Turpin. Charlie is interviewed by the boss who uses a funnel and long tube as a hearing aid. Charlie uses the device with a cigarette in his mouth which gets lodged in the funnel. Charlie tries to dislodge it by pouring ink into the funnel and blowing but ends up with the ink on his own face. Hired as an assistant carpenter/prop man, he disrupts rehearsals and gets into trouble with the director. He is told to don an extra's military costume for the Russian melodrama being filmed, but he goes instead into the star's dressing room and steals his costume. Charlie is as inept as an actor as he is a carpenter, sitting on the train of the leading lady's gown, tearing it off as she walks up a staircase and blowing his nose in it as he overacts tearfully. (This scene contains one of the first dolly shots in Chaplin films). He later topples a large column which lands on top of him, and he is sat upon by Turpin, who, having replaced him as prop man is called to lift the column. Eventually, the star actor arrives, and, enraged at finding his costume missing, starts a melee on stage which ends with everyone but Charlie unconscious.

There are no critic reviews yet for His New Job (Charlie's New Job). Keep checking Rotten Tomatoes for updates!

Early Chaplin short with lots of physical comedy. Ben Turpin is great as the film extra, coordinating his facial expressions with his movements to convey pure comic effect. Chaplin's role here, although different from his immortal Tramp character, is very similar in appearance; only the unconditional sensibility of the latter that made an icon out of him was completely absent here; one-sided slapstick hilarity is all.

This one was a bit better. It questioned society's norms and the humor was better since Charlie was aware of his surroundings and trying to cause a little mischief at times. He tries to change the rules at the studio hiring office but finally gets a job on a movie set. He's clumsy doing all kinds of set construction work and struggles with every kind of authority he meets. The limp sword is hilarious too. Again it ends with a manic anarchic fight.