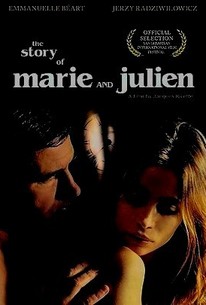 Jacques Rivette's Histoire de Marie et Julien (The Story of Marie and Julien) stars Emmanuelle Béart and Jerzy Radziwilowicz as a pair of ex-lovers who get back together after their lives change. Julien (Radziwilowicz) is a clock repairman whose girlfriend has left him. Marie (Béart) is a mysterious woman who does not bleed after being cut. Her boyfriend has died. Marie and Julien had once engaged in an affair when they were each involved with other people, and now that they have no emotional entanglements, they slowly begin a new relationship. This film started decades before as a project in Rivette's "Scenes From a Parallel Life" series and abandons the majority of the formal rules imposed by the filmmaker on the other films in the cycle. ~ Perry Seibert, Rovi

Olivier Cruveiller
as The Publisher

Mathias Jung
as The Concierge

Nicole Garcia
as The Friend
View All

Critic Reviews for The Story of Marie and Julien

All the story's power is allowed to leak away by the deliberative heaviness with which Rivette pads through his 150-minute narrative, with its exasperating lack of dramatic emphasis.

Far from bad, but academic and -- for once with this director -- overlong.

An intellectual exercise in metaphysical romance -- Ghost for art-house audiences. But what it gains from structural analysis, it loses in emotional impact.

Although slow-moving and slightly muted in its emotional pay-off, the film is distinguished by a carefully layered performance from the impressive Béart, who subtly conveys Marie's other-worldly detachment and her human vulnerability.

Rivette, working from a story he developed with Pascal Bonitzer and Christine Laurent, ushers us slyly toward an ending that surprises and provokes, yet offers the possibility of love reborn.

I can't always see what [director Jacquees] Rivette gains by stripping his presentation down to such bare patterns of encryption, but his cerebrality paradoxically heightens the sensual impact of his imagery.

For a picture about the fantastic and supernatural, it's a surprisingly flat and unmagical affair.

An intellectually dazzling but slow-moving, dreary and somewhat pretentious chamberwork.

One of Rivette's most straightforward and intriguing works, and one of his most successful narratives.

Insistent minimalism--not everyone's expectations since "The Sixth Sense" but sighting of the Beart body creates an effect of its own.

["The Story of Marie and Julien"] is lovely to look at, gorgeously photographed by William Lubchansky.... But, the film never stirred my core.

Audience Reviews for The Story of Marie and Julien

A modest little gem. As you probably guessed, this is about the relationship between Marie and Julien who reconnect after sharing an unspecified though likely intimate encounter one year ago. Not long after meeting Marie, I thought to myself, "There is something wrong with this woman" and I was right although not nearly in the way I expected. To reveal any more would be irresponsible, all I will say is that any seasoned moviegoer has seen dozens of this kind of movie, but I have not seen one handled quite this way which was very gratifying. It is slow, long, and methodical, there is absolutely no music soundtrack, and often you must watch people performing actions in silence. However if you are patient and curious enough to discover the secrets, there is quite a surprise in store, some genuinely erotic love scenes, and a teary, fulfilling conclusion. I've seen over 25 of Emmanuelle Beart's films and this rates among her finest, plus it features a cat named Nevermore who gives one of the best feline performances of all time! I'm very glad I went into this blind and you will be thankful too the less you know.

this movie is so long and drawn out, and the payoff is minimal after such an arduous wait. Both lead characters act as though the entire story is a dream sequence, and Jerzy acts mainly stone faced throughout, as though he is in a permanent daze. At the least, Ms Beart is terrific to gaze at, and puts forth a believable performance. you have heard of the movie "Casper the friendly ghost" ? This movie would aptly be titled "Marie, the horny ghost". The best part of this dvd is the extra where the director is interviewed. His intellectual discussion about the difference between phantoms and ghosts provided me some needed unintentional humor after watching this movie

Expressive qualities won't be needed in the afterlife,ouch...as to not reveal much,Rivette underlines the importance of being loyal and rampaging your beliefs.Julien is a despicable person and Marie is the angel in disguise,and these malicious creatures crave each other like animals.Rivette's poetic way to show it all prevents him from offering a true masterpiece but I forgive him because his subplot devices and fascinating tempos distinguish him.

The Story of Marie and Julien Quotes