History Is Made At Night1937 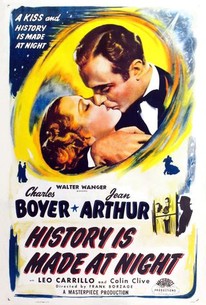 History Is Made At Night Photos

History is Made at Night has been described as a romantic tragedy, which it indeed is, up to a point. The film begins deceptively in screwball-comedy fashion with socialite Jean Arthur and handsome head waiter Charles Boyer "meeting cute." But there's nothing cute about Arthur's estranged husband, shipbuilder Colin Clive. Insanely jealous, Clive arranges for the ship on which his wife and her lover are travelling to hit an iceberg--then, aghast at what he has done, Clive commits suicide. As the ship lists dangerously close to sinking beneath the waves, the terrified passengers--Boyer and Arthur included--huddle on the deck. The fog-enshrouded scene in which Charles and Jean affirm their love in the face of death is among the most heartrending sequences ever filmed (the director was Frank Borzage, a past master at transforming potential maudlin material into high-gloss art). Even the happy ending of History is Made at Night does not diminish the power and poignancy of that shipboard scene.

Critic Reviews for History Is Made At Night

History Is Made at Night is a patchwork quilt genre bender that stands as one of Frank Borzage's supreme achievements.

A go-for-broke approach to genre conventions imbues History is Made at Night with a sparkling infusion of "what comes next," making it feel more alive than most movies from the era.

Borzage's gift is that he makes this bizarre, convoluted story somehow flow, while feeling totally natural and honest. The emotions felt in it are absolutely genuine, and it truly is a thing of beauty.

Jean Arthur was a bright light of the screwball comedy genre...

a wild and entertaining mis-mash of styles, tones, and genres, a kind of barely controlled chaos reflected in its production

Something quietly enchanting, a guileless and wide-eyed paean to romance whose innocence never feels in any way cloying - it's just pure classical Hollywood magic.

Deeply romantic, occasionally melodramatic, and sometimes silly. But Arthur and Boyer are irresistible.

Going from unabashedly romantic to highly comic to overtly melodramatic to sincerely tragic, History makes no apologies for trying to cover as many disparate tones in one film as possible. (Not plausible, but possible...)

The final terror, when the iceberg looms suddenly out of the sea and fog, is enough to wake you shuddering in the night.

[Frank] Borzage's commitment to the couple and belief in the power of love to not simply conquer all but to elevate the lovers to a heaven on Earth transcends the plot. E

One of the silliest and therefore most magnetic of all '30s romantic melodramas.

A type of unbelievable melodrama that went out of fashion ages ago.

Audience Reviews for History Is Made At Night

Charles Boyer and Jean Arthur share some nice chemistry in the standard love story that is not standard at all. Arthur is married unhappily to Colin Clive (yep, he of Frankenstein fame) and the reason for her unhappiness is as grownup as any I've seen in any movie ever. The film flickers meanwhile from screwball comedy to melodrama to disaster flick in the blink of an eye and, rather than distract, the method keeps one involved. Keep an eye out for this one, as is a classic.

what an odd film that covers every genre from romantic comedy to thriller to heavy melodrama to disaster film! the lovely jean arthur has great chemistry with her dashing leading man charles boyer, but their love is thwarted by her dastardly, and psychotically jealous, ex-husband colin clive. the original dr frankenstein died shortly after this film was completed

This is a very interesting movie because it combines so many different elements of different genres, but it gets to be too much, and I really didn't like the ending.

History Is Made At Night Quotes